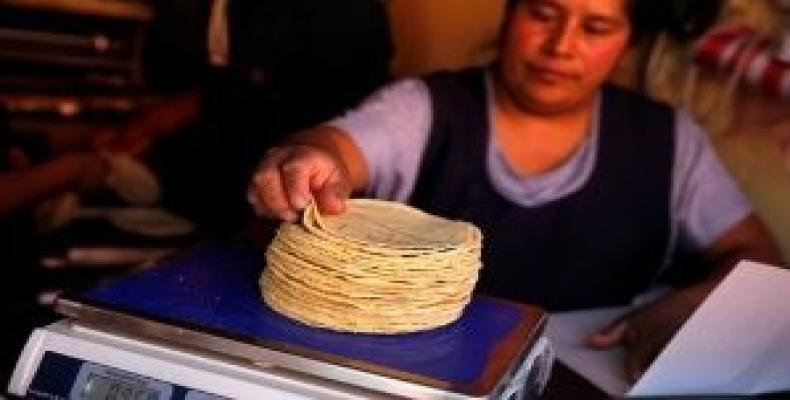 Mexico City, January 16 (RHC)-- For millions of Mexicans, not being able to afford corn tortillas was once unthinkable.  But according to economic analysts, surging fuel prices in Mexico have caused financial speculation on maize that is causing inflated prices for corn tortillas, a sacred daily staple in Mexicans' diet.

In seven out of 10 cities in Mexico, tortillas have had an increase of five percent reaching 80 cents per kilogram in a country where the daily minimum wage is $3.80 and where nearly half the population lives in poverty.

Tortilla prices are an index for economists and sociologists in Mexico, especially because not being able to afford the corn tortillas daily is unthinkable for millions of people.  The government denies that the recent 20 percent increase in fuel prices has triggered inflation on food prices and have blamed the unstoppable slide of the Mexican peso against the dollar, a trend sparked by fears that U.S. President-elect Donald Trump’s protectionist agenda will wreak havoc on Mexico’s economy.

Analysts warn that inflation will further enrage millions of Mexicans who have been protesting since the beginning of the year against the neo-liberal policies of President Enrique Peña Nieto.  Protests in some cases have turned violent, unleashing a wave of lootings that have left four dead and thousands arrested.

According to official figures, 46.2 percent -- or 55.3 million people out of the country's 120 million -- live in poverty.  This is despite the fact that Mexico is the second largest economy in Latin America and the 15th largest in the world.

More fuel price increases are slated for February as the government phases out subsidies, but Peña Nieto vowed he would keep a lid on other consumer prices, while the central bank said any spike in inflation would be temporary.