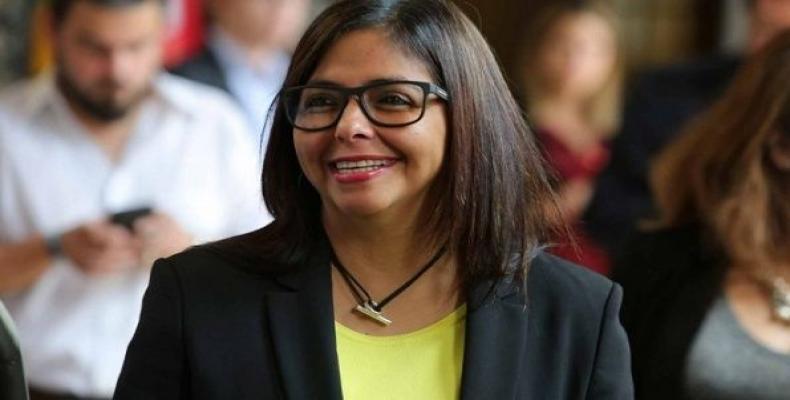 Caracas, October 20 (RHC)-- At an anti-imperialist workshop for the 19th World Festival of Youth and Students in Sochi, Russia, attendants were commended by Venezuelan National Constituent Assembly, ANC, President Delcy Rodriguez, who praised their efforts toward world peace and equality for the future. In a video-taped message, Rodriguez applauded the students for their determination, acknowledging the difficulties they face from unemployment, poor education and a lack of information and communication technologies. These problems, Rodriguez said, makes it almost impossible to benefit from the world’s economic and technological growth.

“You are victims of an unequal world which fosters war, terrorism, exclusion and all kinds of warfare intended to annihilate humanity," Rodriguez said, later offering more optimistic advice. “You are the creative vanguard for a world based on solidarity, cooperation, friendship and brotherhood.”

The Venezuelan leader also spoke about recent political events in the South American country, such as the regional elections, the formation of the ANC and violent opposition protests that began in April. She slammed the United States, which she described as a “disused and declining empire," for manipulating these events in favor of their foreign policy goals.

“In light of serious imperial threats against our homeland, President Maduro asked the Venezuelan people to defend peace and sovereignty and our people responded. We are proud to count on President Nicolas Maduro, who was a young revolutionary, just like you,” she said.

“You are in Russia, a sacred land, which 100 years ago experienced the first historical challenge to the capitalist model in the world’s political order.” Rodriguez called on the young participants to continue fighting for "a world of equality and peace for a future which ensures life on the planet.” She said: “Defeat is not possible with you at the forefront." And she added: “You are the guarantee, with your consciousness, with your hearts that a new world is possible, a world of equality, a world of peace and a world of justice."

Around 30,000 participants from 150 countries arrived Saturday in Sochi, Russia for a week of events organized for youth and students.