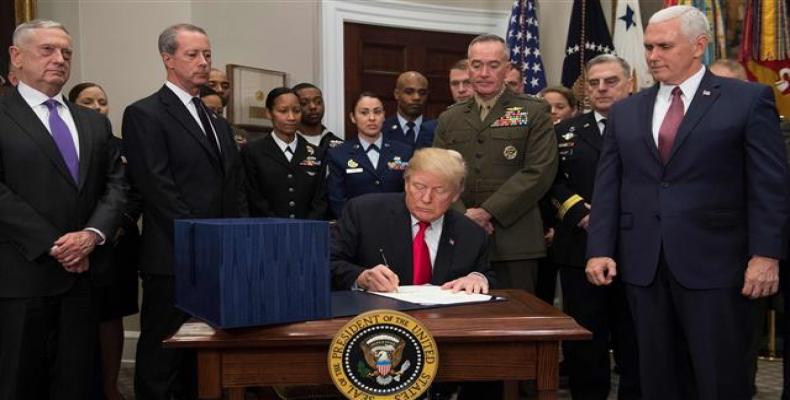 The National Defense Authorization Act (NDAA) was approved with bipartisan support on Tuesday.  It is worth nearly 700 billion dollars allocated for the fiscal year 2018.

Trump called on Congress to fully fund the measure and lift the budget caps that have forced limits on U.S. defense spending for several years.  "With the signing of this defense bill, we accelerate the process of fully restoring America's military might," Trump said at a White House signing ceremony.  "This legislation will enhance our readiness ... and modernize our forces, and help provide our service members with the tools that they need to fight and to win."

The massive spending package amounts to more than that of the world's next seven militaries combined.

As of January 2017, the United States has 1.3 million forces on active duty, 450,000 of them stationed outside of America, in countries where the American forces are actually considered “foreign.”

The bill authorizes the purchase and construction of 90 Lockheed Martin F-35 fighter jets and 14 Navy ships, while allocating 12.3 billion dollars for missile defense operations and 1.8 billion for the training of US-backed forces in Iraq and Syria.

The spending bill is also aimed at enhancing US military attempts in Europe and security assistance to Ukraine, as well as granting authorization for developing a new ground-launched cruise missile.

The U.S. already has the highest military spending in the world.  The new budget increase serves to further expand the U.S. military as Trump has promised.  He has pledged a "massive” increase in the Pentagon’s budget spending to implement “the greatest military build-up in American history.”