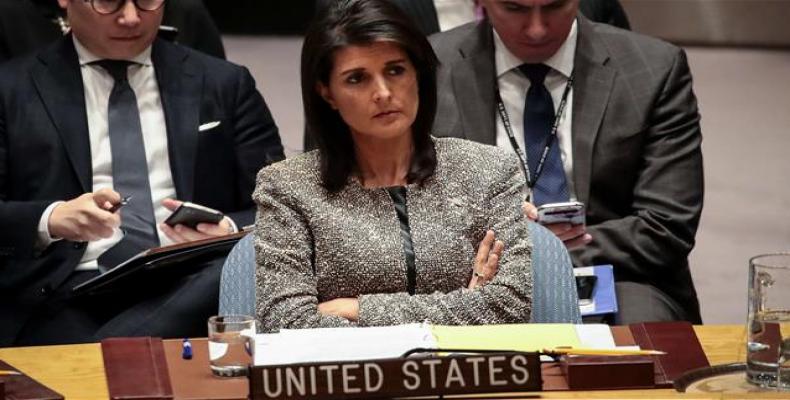 New York, December 26 (RHC-Agencies) --The U.S. Mission to the United Nations said that the U.N.’s 2018-2019 budget would be slashed by over 285 million dollars. The mission said reductions would also be made to the U.N.’s management and support functions.

The announcement comes just days after more than 120 nations criticized the United States for its decision to recognize Jerusalem as the capital of Israel.

Ambassador Nikki Haley made the announcement and specifically blamed the world body for what she described as “its budgetary excesses “without making a specific reference to last week's vote on President Donald Trump's controversial Jerusalem decision.

Haley said there might be further budget cuts in the future. President Trump's proposed 2018 spending budget would end funding for U.N. climate change programs and would cut funding to the United Nations Children’s Fund (UNICEF) by 16 percent.

Trump has long discussed cutting U.S. contributions to the U.N., and Haley hinted that the current administration could be motivated by a lack of support for its efforts around the world, specifically after the Jerusalem vote last week.

Ambassador Haley was clear in her comments after the budget cut, telling the press "We will no longer let the generosity of the American people be taken advantage of or remain unchecked," adding: "This historic reduction in spending – in addition to many other moves toward a more efficient and accountable UN – is a big step in the right direction.

“While we are pleased with the results of this year’s budget negotiations, you can be sure we’ll continue to look at ways to increase the UN’s efficiency‎ while protecting our interests,” Haley said.

All 193 members of the United Nations are required to make payments as a part of their membership, but the amount each country must pay differs and is calculated by a formula that factors in population and gross national income. The U.S. currently funds about 22 percent of the U.N.’s 5.4-billion-dollar annual budget.