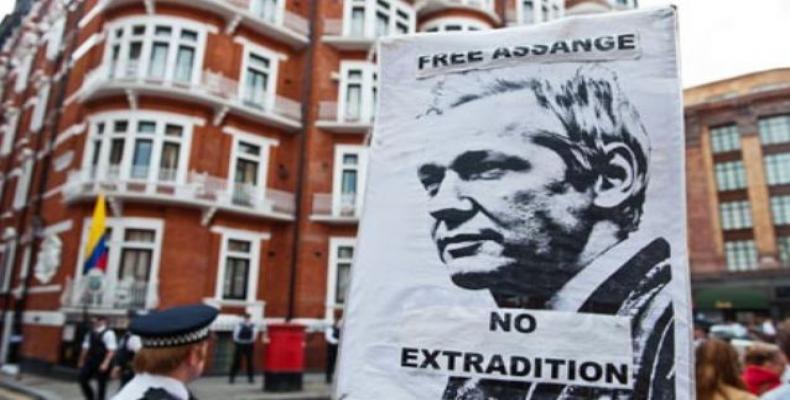 London, July 24 (RHC)-- Police in London are trying to prevent a protest in front of the Ecuadorian embassy where authorities are believed to be preparing to evict Julian Assange, the founder of the WikiLeaks who has been holed up in the embassy for more than six years.

Police were speaking to protesters outside the embassy on Tuesday as more people were joining an action to prevent a potential handover of Assange to the British authorities.

Earlier reports suggested that Ecuadorian President Lenin Moreno and British authorities had come to an agreement to have Assange evicted from the embassy premises as early as this week.

Assange, a 47-year-old Australian computer programmer, sought asylum in the embassy in 2012, fearful that he might be detained and then extradited to Sweden, where he had been wanted for sexual harassment charges.  He has repeatedly insisted that he is paying a price for revelations he had made about wrong practices by the U.S. military.  Assange is mainly concerned that he would end up in the United States and be prosecuted for publishing classified documents that were leaked by American whistleblower Chelsea Manning.

According to the local reports, Ecuadorian embassy would hand over Assange to British authorities, but there is no report about any immediate extradition to the United States.

A white van was seen leaving the embassy over the weekend, reportedly carrying belongings and furniture, another sign that Assange was preparing to leave the embassy.  People gathering in front of the embassy on Tuesday said the whistleblower was innocent and was being used as a bargaining chip by Ecuador.

“The new Ecuadorian president probably wants to be good friends with England and the government here,” said a protester, adding that Assange “just wants to expose the truth.”

Another protester said the current British government was desperate to please the United States in any possible manner and Assange’s extradition to the US could be a major achievement.