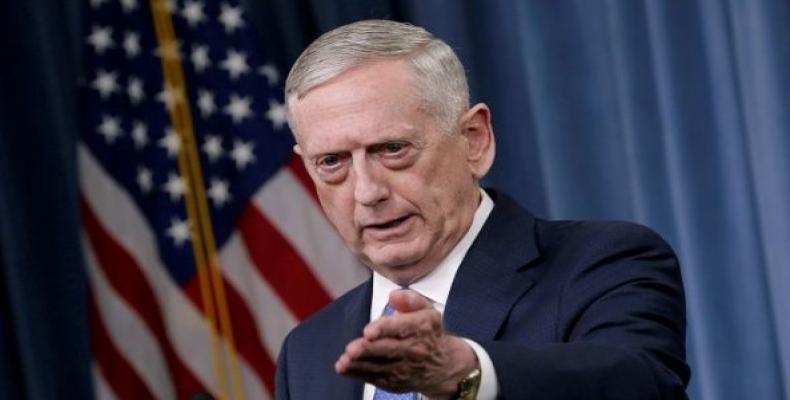 Washington, August 13 (RHC)-- U.S. Secretary of Defense James Mattis has begun his first South American tour this Sunday, arriving in Brazil.  His agenda includes visits to defense authorities in Argentina, Chile, and Colombia according to details provided by the Department of Defense.

In Brazil, Mattis is meeting with senior officials and defense leaders and speaks at the Escola Superior de Guerra, the country's college for politics, defense and strategy.  On Tuesday, the 14th, he travels to Buenos Aires, and later to Chile and Colombia, where he will end his visit by meeting members of newly-elected Colombian President Ivan Duque's cabinet.

The Pentagon said the "trip underscores the Department's strong defense ties with Brazil, Argentina, Chile, and Colombia... adding that these relationships are critical to a collaborative, prosperous and secure Western Hemisphere."  Ties between the U.S. government and the governments of Brazil and Argentina have improved considerably since the impeachment process against elected president Dilma Rousseff, and the victory of right-wing businessman Mauricio Macri in Argentina.

Since then, Brazil's unelected president Michel Temer has invited the U.S. to use the Alcantara missile and rocket launching base and to conduct joint military exercises in the Amazon, while Argentina's Macri reached an agreement with the U.S. in 2016, allowing the U.S. to build three bases.

One will be built in Ushuaia, in Tierra del Fuego.  According to Elsa Bruzzone, defense specialist of the Center of Military Men for Argentine Democracy (CEMIDA) the base in Ushuaia is "disguised as a scientific base, and has as its objective the Antartida, the greatest reserve of frozen fresh water in the world."

Another is an installation is in the Triple Frontier, in Misiones, where the Guarani aquifer is located.  It will reportedly serve to monitor and fight drug trafficking.  The Guarani Aquifer is the second largest known aquifer system and a vital source of fresh water.

The third is a “humanitarian” base in the western city of Neuquen, which has already generated popular resistance.  Mapuche leader Jorge Nahual warned “the base comes to fulfill a strategic intelligence objective of the United States military, that seeks to protect their corporate interests.  Patagonia is an inexhaustible source of resources, and the companies that exploit those resources are from the United States.  That’s what they are here to protect.”

Chile and Colombia, Mattis' last two stops, have been reliable U.S. allies in the region.  The latter recently announced it was withdrawing from the Union of South American Nations (UNASUR), a regional integration body that proposed the expulsion of all foreign military bases in the region.