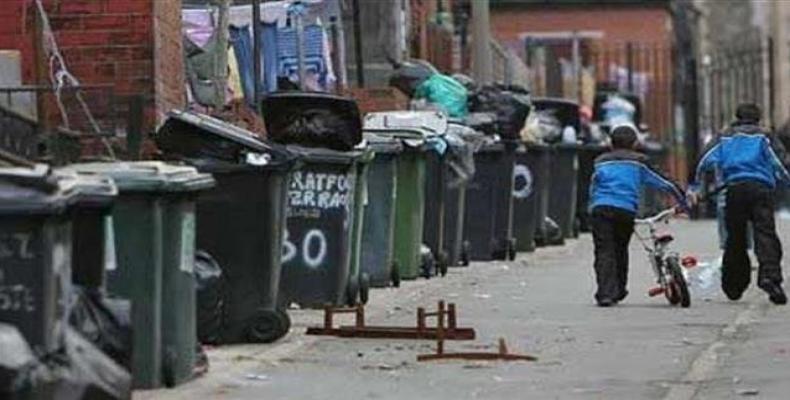 London, December 24 (RHC)-- More than 130,000 homeless children will be living in temporary accommodation this Christmas in Britain, according to estimates by the homelessness charity Shelter.

Compared with the end of 2017, some 3,000 more children are believed to be homeless - as well as the small number of children sleeping rough, said Shelter in a report, adding that the figure also includes those living in insecure temporary accommodation.

The calculations mean that one in every 103 children in the UK will be homeless this Christmas, the study found, further revealing the scale of the country's housing crisis.

The report also estimated that 9,500 children would spend Christmas Day in a hostel or other temporary accommodation, warning that the UK's housing crisis is now being “felt across a generation.”

In an emergency appeal, the charity criticized the government, saying it had failed to live up to its commitments to reduce the homelessness rate in the country.

More than 320,000 people are recorded this year as homeless in Britain, an analysis from housing charity Shelter shows.

The report also made clear that some of the temporary accommodations -- referred to as Bed and Breakfasts or B&B’s in the UK -- where children will be placed are “not places for children” because of problems with rats, or places where children have to share beds with family members and having to “play in dirty public corridors.”

"Over the last five years, hundreds of thousands of children have known what it's like to be homeless.  The impact on these young people cannot be overstated,” Greg Beales, who serves as the Director of Campaigns at Shelter, said after the release of the figures.

“The number of children hidden away in hostels and B&Bs is enough to make anyone's heart sink.  These are not places for children.  We hear about cold, damp, even rats,” he added.

The findings provide yet more evidence of the homelessness epidemic that has plagued Britain in recent years.  Last month, another Shelter study found that roughly one in two hundred Britons is sleeping on the streets or in temporary accommodation.

Back in November, a UN human rights expert published a damning report which blamed the Conservative government's austerity policies for causing a rapid rise in homelessness and inflicting unnecessary misery on the UK's most impoverished communities.

In central London borough of Westminster, one in every eleven children is homeless, while in Kensington and Chelsea, which has the highest average house prices in the UK, one in every twelve has no permanent home.

“It doesn't have to be this way.  If we act now, we can change tomorrow to make sure every child has somewhere they can call home,” Beales said.

Around two-thirds of the Britain’s homeless children are said to be living in London, according to the new figures.