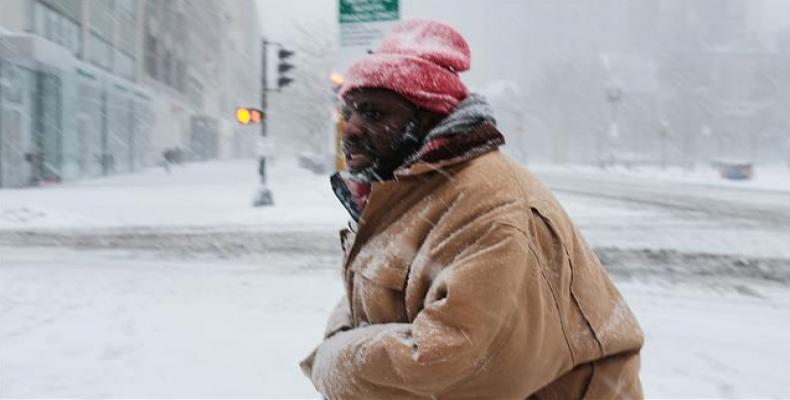 Amid the brutal cold, officials in New York, Boston, Washington and other major cities are stepping up their efforts to find homeless people on the streets and encourage them into shelters.  The cold snap has been blamed for the death of at least 19 homeless men, according to officials and news media.

In Boston, the Pine Street Inn is filled with enough beds to sleep close to 500 people, but they are not enough to house all the homeless individuals seeking protection from the harsh subfreezing temperatures, said shelter spokeswoman Barbara Trevisan.

Dozens of hungry people lined up at the Boston facility over the weekend for a lunch of soup and sandwiches.  The facility is serving 2,500 meals each day during this period of high demand, 500 more than usual.

The cost of food for extra meals, doubling staff levels during the day and sending out more crews to find people sleeping on the streets, has caused the facility to overrun its budget by about 25 percent during the past two weeks, said shelter manager Josh O'Brien.

"It's a big strain," said O'Brien, who told Reuters he has not experienced a period of intense cold this long in the 25 years he has run homeless shelters.

Homelessness is on the rise in the United States, according to government data released last month, which said 553,742 people lacked homes on a given night in 2017.

That figure was up 1 percent from 2016, an increase that reflects rising housing prices in cities from New York to San Francisco.

In New York, where homelessness has surged to a record high, the city is planning to add another 450 beds for homeless people from its current 1,100, said Isaac McGinn, a spokesman for the city's Department of Homeless Services.

More than 130,000 New York residents found themselves homeless at some point in 2017, according to the Coalition for the Homeless, an advocacy and service group.

"We're currently at record homelessness levels, so capacity is tight and that is definitely a concern," said Giselle Routhier, policy director at the Coalition.

Washington has also had emergency measures in place since last week, opening additional shelter options and sending teams out onto the streets to offer care and urge people indoors.

The US capital has the highest homelessness rate in the United States, according to a 2016 survey from the U.S. Conference of Mayors, an umbrella group.  At 124 people per 10,000, the city's homelessness rate is more than double the national average.