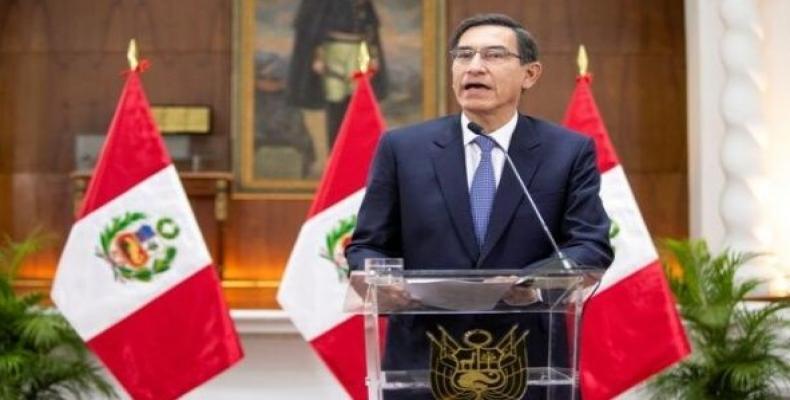 Vizcarra took the drastic step to keep lawmakers from appointing up to six out of seven justices in the Constitutional Court (TC), a likely referee in any legal dispute between the government and Congress.

According to congressman Clemente Flores, after the election of Gonzalo Ortiz de Zeballos as the first member of the TC, the head of state met with his legal team to assess the closure of the Legislative Power.

"Let the people finally decide. The closure I have done is within my powers permitted by the Constitution. Ending this stage of political entrapment so that the future of the country be defined at the polls," said the president in a speech read from the Government Palace.

Under Peru’s constitution, presidents can dissolve Congress to call new elections if the assembly delivers two votes of no-confidence in a government. The current Congress has already rejected a confidence vote once and shelved Vizcarra’s proposal for a snap election on Thursday.

Vizcarra cannot run in the next general elections due to limits on consecutive terms. He said he wants an early end to the current presidential and congressional terms to end an impasse over his anti-graft reforms and to rebuild trust in voters following back-to-back graft scandals in recent years.

Some opposition lawmakers have vowed to physically resist any attempt to close Congress. They say the government cannot override Congress’ constitutional authority to appoint new members.

“President Martin Vizcarra is announcing a coup d’etat,” said congressman Salvador Heresi, adding that “he would go down in history as a dictator.”

The power struggle between the executive and legislature has brought Peru’s young democracy to the brink of a constitutional crisis, threatening to grind lawmaking to a halt and potentially trigger unrest in one of Latin America’s most stable economies.

The sol currency opened down 0.35 percent against the dollar Monday.  Late last week, it fell one percent as the market braced for an ugly political showdown.