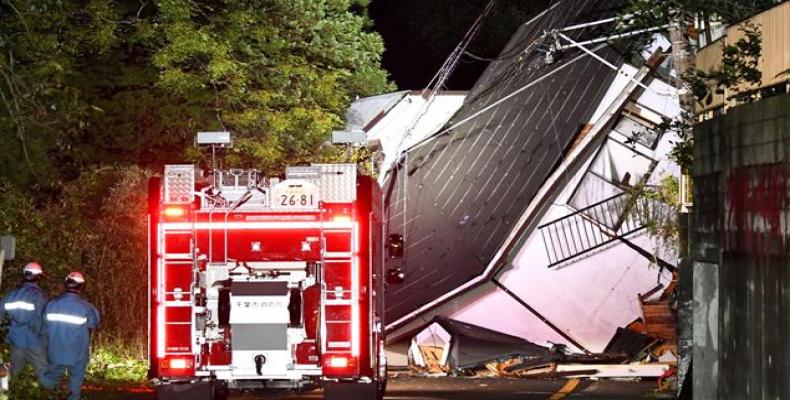 Tokyo, October 26 (RHC)-- Torrential rains have battered parts of eastern Japan, killing at least ten people, causing rivers to overflow and prompting evacuation orders for hundreds of thousands two weeks after the areas were hit by floods and high winds from Typhoon Hagibis.

By early Saturday, ten people had died and two were missing in Chiba Prefecture, just east of Tokyo, public broadcaster NHK reported.  Landslides ripped waterlogged areas in the region, inundated by its third rainstorm in six weeks, and in some places a month's worth of rain fell in half a day.

Evacuation orders and advisories were issued along much of the northern corridor already hit by two typhoons since last month.  The city of Ushiku in Chiba received 283.5 mm (11 inches) of rain over 12 hours.

Authorities warned of the chance of further landslides and floods, especially in areas hit by levee breaks that have yet to be repaired after Hagibis lashed central and eastern Japan with heavy rains and high winds.  That typhoon killed at least 82 people, with nearly a dozen still missing and more than 300 injured.

"It has been two weeks since the disaster caused by Typhoon 19 (Hagibis) and the rain has continued to fall intermittently so people to need to take the necessary caution," Prime Minister Shinzo Abe said in a tweet.

Evacuation orders were issued for at least 80,000 people in Chiba, where rivers were rising precariously close to their banks.  Most train services in Chiba were halted, leaving travelers stranded at stations, NHK said.

Parts of Chiba were drenched by 86 mm (3.4 inches) of rain in an hour on Friday morning, with some areas receiving more than a month of rain in one day.  Much of Chiba lost power, in some cases for weeks, in Typhoon Faxai in September and then were hit by heavy rains due to Hagibis.

The Japanese government also asked 340,205 people to evacuate their homes in Fukushima prefecture because of possible landslides.  The rain pounded the Tokyo area for much of the day before moving north.  Total rainfall in the area around Tokyo was likely to reach around 200 to 300 mm (8-12 inches) by evening, the Japan Meteorological Agency said.  Some flights to Tokyo were diverted because of the downpour, NHK said.

Tropical storm Bualoi, which battered the Ogasawara islands south of the main Japanese archipelago on Thursday while still at typhoon strength, was heading out into the Pacific and expected to weaken to a tropical depression.