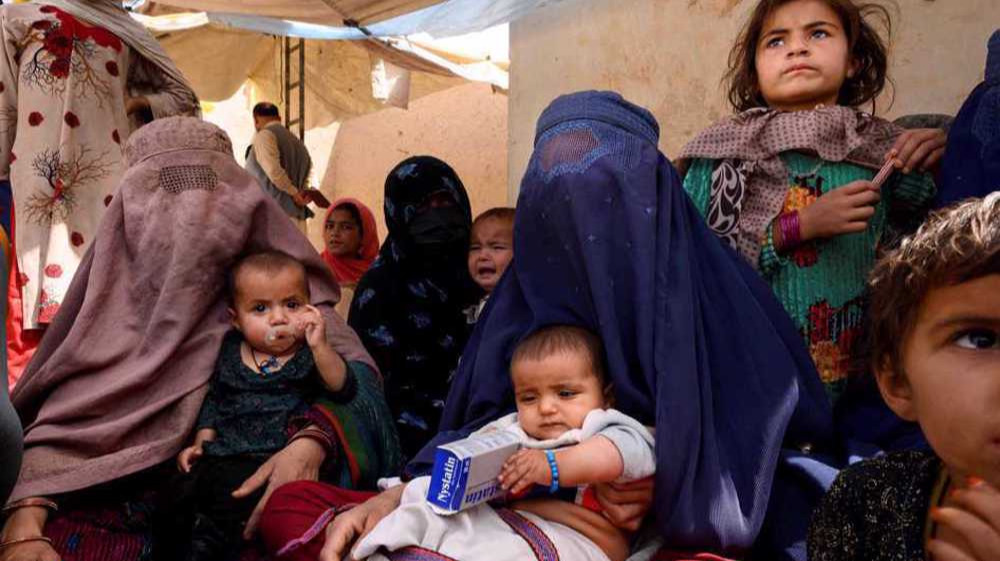 Women are seen waiting for their turn at a mobile clinic for women and children set up at the residence of a local elder in Yarmuhamad Village, near Lashkar Gah, in Helmand Province, Afghanistan. (By AFP)

Kabul, October 11 (RHC)-- The United Nations Children’s Fund (UNICEF) has called for immediate humanitarian assistance to Afghanistan, warning that at least one million children could face severe malnutrition and even death in the war-ravaged country this year.

UNICEF Deputy Executive Director Omar Abdi made the remarks in a statement on Sunday, following his trip to Afghanistan this week.   “Without immediate action, an estimated one million children in Afghanistan are projected to suffer from severe acute malnutrition in 2021 and could die,” Abdi said.

“Severe outbreaks of measles and acute watery diarrhoea have further exacerbated the situation, putting more children at risk,” he added.  During a visit to Kabul’s Indira Gandhi Children’s hospital, the top UN official met with dozens of children suffering from severe acute malnutrition, a life-threatening illness.

Abdi also met with officials from the Taliban’s newly-announced interim government, where he highlighted the need for children’s access to basic health care, immunization, nutrition, water and sanitation, and child protection services.

He further called for polio, measles and COVID immunization campaigns to resume immediately, emphasizing the need to help protect children and communities from vaccine-preventable diseases.

According to UNICEF, Abdi also met with partners at a COVID-19 and polio call center to promote vaccination.  Elsewhere in his remarks, Abdi stressed the critical importance of ensuring all boys and girls are allowed to continue their education at all levels, saying they should “participate meaningfully in building the future of their country.”

“UNICEF will continue to press for the rights of every girl, boy and woman in Afghanistan,” he said, adding “Our objective is to see an Afghanistan where every girl and every boy are in school, have quality health care, and are protected from all forms of violence.”

The latest development comes as UN High Commissioner for Refugees Filippo Grandi has already warned of a potential humanitarian catastrophe in Afghanistan if much-needed aid to the country is delayed, urging international donors to honor their financial pledges immediately.

The previous government of Afghanistan collapsed on August 15 in the face of lightning advances by Taliban militants.  On September 7, the Taliban announced the formation of a caretaker government in Afghanistan, where hunger and poverty significantly increased during the past month.

Even before the Taliban's takeover of the country, over 18 million Afghans required urgent humanitarian assistance.  The persisting conflict and violence also internally displaced more than 3.5 million people, including some 630,000 uprooted during 2021.

The Taliban first ruled Afghanistan from 1996 to 2001, when the United States invaded the country and toppled the Taliban-run government under the pretext of fighting terrorism following the September 11 attacks in the US.

Two decades of foreign war and occupation have left Afghanistan impoverished and mired in an extended humanitarian crisis.  Afghanistan, now, under the Taliban control is facing many challenges, with experts calling for urgent international action to support millions of people struggling with rising hunger and the collapse of services, which risk generating a much bigger humanitarian crisis.