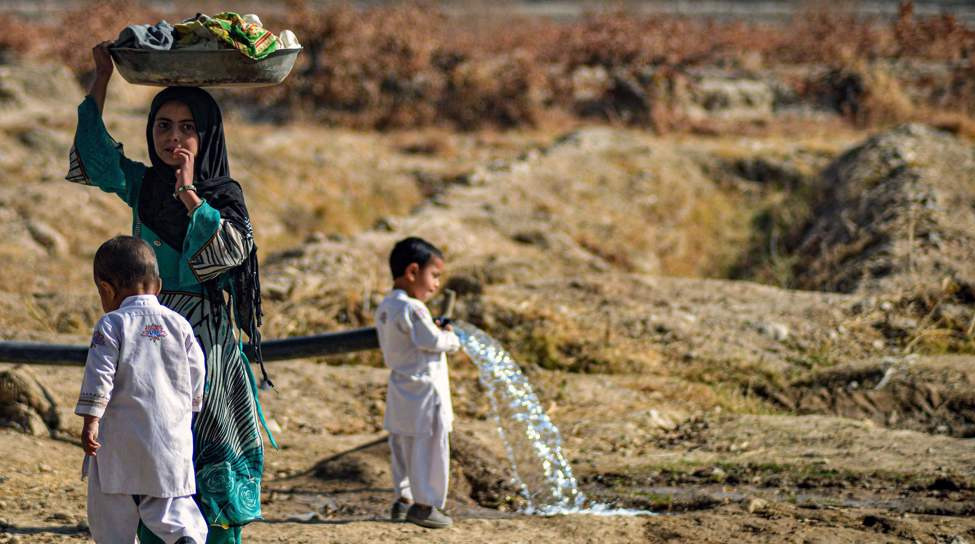 An Afghan girl (2L) carries a bucket full of washed clothes on her head in Kandahar, Afghanistan, on January 2, 2022. (Photo by AFP)

United Nations, January 26 (RHC)-- The UN children’s agency (UNICEF) has warned that more than one million children in Afghanistan are at the risk of severe acute malnutrition and death, calling for humanitarian aid to prevent the catastrophe.

Pravaran Mahat, a communication specialist at UNICEF’s South Asia regional office, after his visit to the Indira Gandhi Children’s Hospital in Kabul on Sunday called for “urgent action.”  “UNICEF estimates that without urgent action, more than one million children [in Afghanistan] can suffer from severe acute malnutrition this year,” he said in a statement posted on Twitter.

“That’s why we, as UNICEF, urge and request our countries’ partners and donors to rally support behind the children in Afghanistan,” he added, stressing “They need help. They need it now.”  Mahat noted that Afghan healthcare workers were overwhelmed and mothers were exhausted and concerned over the health condition of their children.

Almost five months after the US-led international coalition hastily abandoned the South Asian country, millions of Afghans are teetering at the brink of starvation, with no food and no money.  Soon after the Taliban laid siege to Kabul mid-August, US and its international partners raced to cut off Afghanistan’s access to international aid and froze roughly $10 billion in assets belonging to the country’s central bank.

The move triggered the rapid collapse of public finances and precipitated the current crisis. European Union also then followed the suit, stopping development assistance to the country, followed by the International Monetary Fund and World Bank.

UN aid agencies have described the country’s situation as one of the world’s most rapidly growing humanitarian crises. According to the UN humanitarian coordination office, half the population is now battling acute hunger, and over nine million people have been displaced.

The world body had earlier warned that millions of Afghans could run out of food before the onset of harsh winter and around one million children were at the risk of starvation and death.  The fact that Afghanistan’s assets worth billions of dollars have been frozen by the US and its allies has only compounded the misery of war-weary Afghans.

The interim government of Taliban has repeatedly called for the release of frozen assets, but Washington has continued to rebuff the calls.