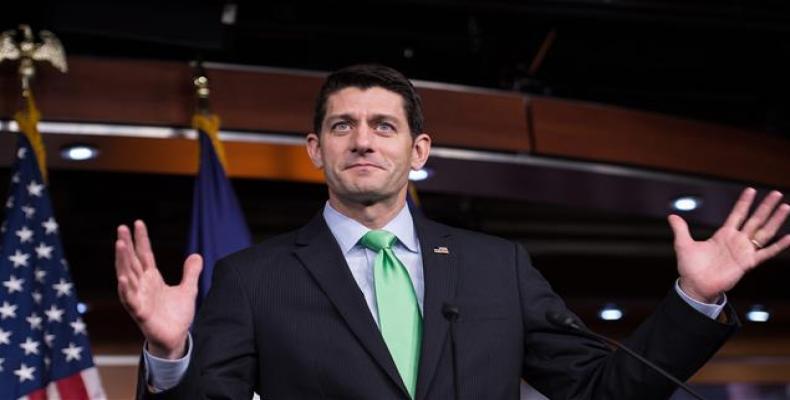 Washington, May 6 (RHC)-- U.S. Speaker of the House Paul Ryan says he is "just not ready" to support Donald Trump as the Republican Party’s presumptive presidential nominee.

Ryan made the comments in an interview with CNN, just hours after U.S. Senate Majority Leader Mitch McConnell said he is committed to supporting Trump's presidential bid and called on fellow Republicans to do the same.

The top Republican in the Senate publicly endorsed Trump's candidacy to prevent what would be in effect “a third term of Barack Obama,” referring to Obama’s former Secretary of State Hillary Clinton, who is on the path to win the Democratic nomination unless something untoward happens.

Ryan, however, said, “I’m just not ready to do that at this point. I’m not there right now.”  He said he hopes to eventually back Trump and "to be a part of this unifying process."

Ryan said he wants Trump to unify "all wings of the Republican Party and the conservative movement" and then launch an election campaign so that Americans will "have something that they're proud to support and proud to be a part of."

After Trump's commanding victory in Indiana's primary on Tuesday, his remaining challengers, Ted Cruz and John Kasich, both suspended their presidential bids, leaving the billionaire businessman on an uncontested path to the nomination.