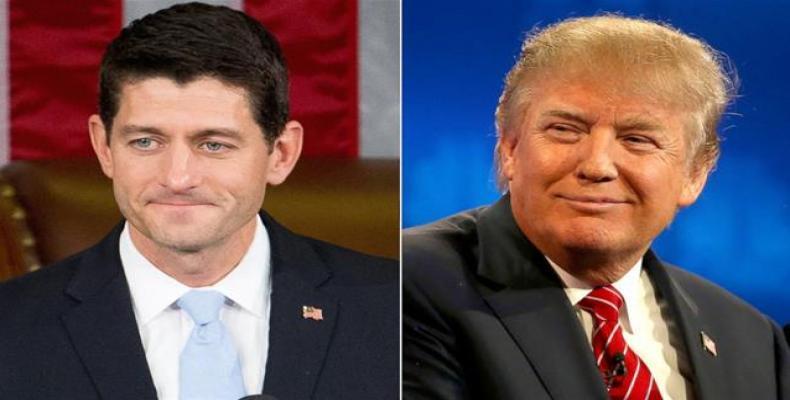 Washington, May 13 (RHC)-- The Speaker of the U.S. House of Representatives Paul Ryan and presumptive GOP presidential nominee Donald Trump have described their meeting as a "positive step" toward unifying the Republican Party to defeat likely Democratic nominee Hillary Clinton.

In a joint statement shortly after their highly-anticipated meeting in Washington, DC, on Thursday, Trump and Ryan called for Republicans to "unite around our shared principles, advance a conservative agenda and do all we can to win" the presidential election in November.

Despite differences of opinion about Trump in the party, Republicans are calling for unity to defeat Clinton.  Ryan and Trump echoed that view in their statement, saying "the U.S. cannot afford another four years of the [President Barack] Obama White House, which is what Hillary Clinton represents."

Ryan said he wants Trump to unify "all wings of the Republican Party and the conservative movement" and then launch an election campaign so that Americans will "have something that they're proud to support and proud to be a part of."

After Trump's commanding victory in Indiana's primary last week, his remaining challengers, Senator Ted Cruz of Texas and Ohio Governor John Kasich, both suspended their presidential bids, leaving the billionaire businessman on an uncontested path to the nomination.

Trump was set to meet with Senate Majority Leader Mitch McConnell next, who said last week that he is committed to supporting Trump's presidential bid and called on fellow Republicans to do the same.