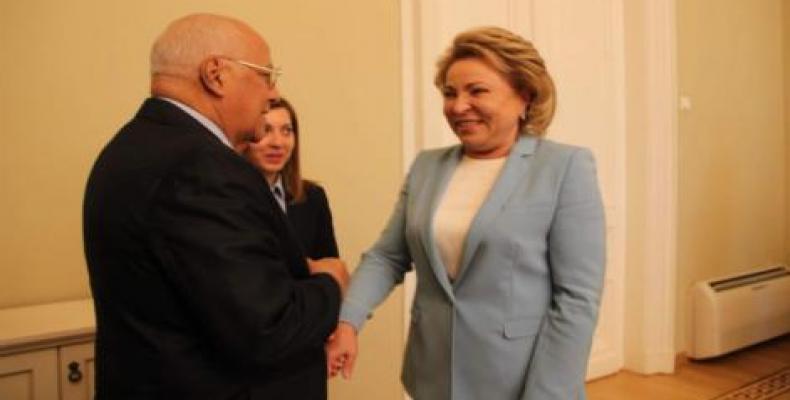 Moscow, June 7(RHC)--The vice president of the Council of Ministers of Cuba, Ricardo Cabrisas Ruiz held in St. Petersburg on Thursday a fraternal meeting with Valentina Matvienko, President of the Federation Council or Upper House of the Russian Parliament.

In welcoming the Cuban vice president, the Russian parliamentarian highlighted the heroic resistance of the Cuban people in face of threats and the tightening of the US blockade.

For his part, Cabrisas Ruiz voiced appreciation for the historic position of Russia  in support of the struggle of the Cuban people against the blockade, aggravated recently with new measures by the Trump administration, such as the activation of Title III of the Helms-BurtonAct, and the prohibition against cruises and educational trips, among other sanctions.

The Cuban representative also rejected the application by the West of coercive measures and unilateral sanctions against the Russian Federation, and appreciated the role played by the Federation Council, and especially by Matvienko, in promoting and strengthening relations between both countries, in several spheres.

Cabrisas Ruíz emphasized the sustained growth of bilateral economic-commercial exchange in recent years, as well as the need to continue strengthening Cuban exports to the Russian market, especially in the sectors of biotechnology, and the pharmaceutical-medical industry among others.