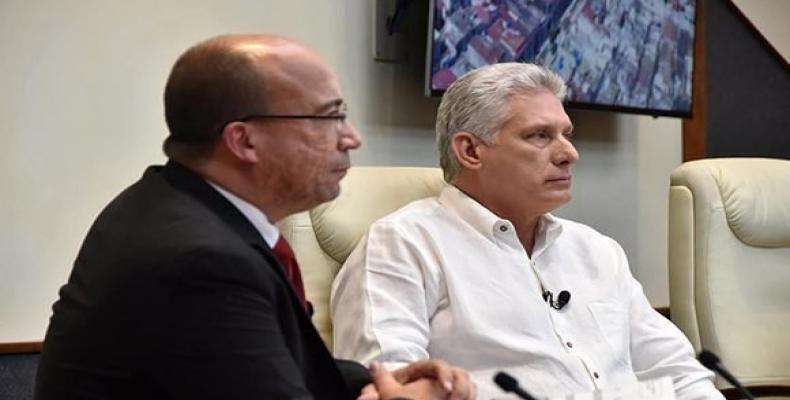 Havana, September 11 (RHC)-- Cuban President Miguel Diaz-Canel addressed Wednesday the difficulties the country is experiencing in terms of availability of some types of fuels, that have recently had an impact.

In a special appearance on the Radio and TV program Mesa Redonda -- Round Table-- the president stressed that the situation the country is experiencing responds to stepped-up U.S. hostility against the island, but he assured that its authorities have a strategy to overcome the current situation.

In view of the obvious difficulties seen in public transportation in recent weeks, the president said that he wanted to inform, along with several ministers what is happening, the root causes, and the possibilities at hand to overcome the difficulties.

The Cuban head of State noted that there is no reason to be afraid, and that Cuba is not returning to the economic crunch of the Special Period, because the country has strengths that were not available during the early 1990s.

In that regard, he noted that Cuba’s oil output currently covers 48 % of its energy production, something that puts the island in a different situation, and that tourism guarantees important convertible currently income, and despite US restrictions on the sector, tourism remains strong.

He explained that the application of unilateral measures by Washington has led to the withdrawal of some shipping companies to transport fuel to the country and he denounced that the genocidal and criminal plan of the U.S. government is aimed at further affecting the quality of life of the population, their progress and even their hopes.

He added that Cuba has been involved in constant negotiations to guarantee the arrival of fuel, and despite its efforts, it was not possible to achieve the timely arrival of oil tankers needed for a steady supply.

Then he said that no fuel will be arriving on the island from September 10 through the 14, and while this happens some saving measures are being implemented.

A tanker will be arriving from an undisclosed location on the 14, and others are expected later in the month.  He also noted that all fuel shipments during the month of October are guaranteed

The president said that the current scenario requires the adoption of short-term measures to minimize the impact of basic services to the population, boost the savings of energy carriers and limit the use of fuel.

In his remarks, Diaz Canel he said “I can serenely and firmly affirm that we have a strategy to win, and that the US administration is not going to achieve its purpose of discouraging the Cuban people and forcing them to give up."

Members of the Council of Ministers participated in the television program, in which the Ministers of Energy and Mines, Raúl García; Transportation, Eduardo Rodríguez, and Economy and Planning, Alejandro Gil, also participated.