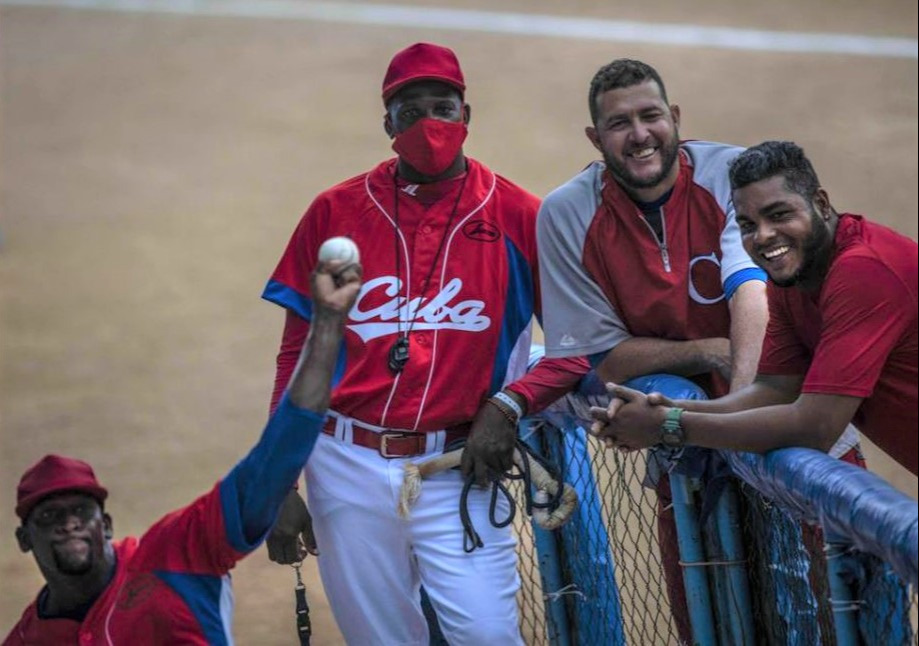 Cuba's pitcher Yoanni Yera Montalvo, left, throws the ball as his teammates smile watching him during a training session at the Estadio Latinoamericano in Havana, Cuba, Tuesday, May 18, 2021.  (AP Photo/Ramon Espinosa)

HAVANA (AP) — Just over a week before the start of the Americas Olympic qualifying tournament in Florida, the Cuban team does not have visas to travel to the United States, athletes and officials said Tuesday.

Managers and players told the Associated Press their concern about the lack of authorizations to attend the event even though they have sought to obtain them in more than three countries. Sanctions imposed by Washington on the island make it impossible to apply in Havana.

“We do not have the pre-Olympic visas at the moment. Huge efforts have been made, ” Luis Daniel Del Risco, treasurer of the Cuban Baseball Federation, told  AP. “We tried in Mexico, we tried in Panama, we tried to do it in Guyana.”

Finally last week the athletes and their managers presented the documentation to the U.S. Embassy in Cuba, which has had its consular area closed since 2017 by order of then-President Donald Trump. They have yet to receive a response.

In response to an AP request to the State Department on Tuesday, U.S. officials declined to provide information about the baseball players, saying that “visa records are confidential.”

The Cuban team has spent months training for the qualifying tournament in the hopes of representing their country in this year’s Tokyo Olympics, team captain Frederich Cepeda said.

“It is very sad what is happening, we have been training for a long time,” the outfielder said during a break in training. “It is a dream for us and for the people of Cuba to achieve the Olympic qualification ... What we want is our right to play.”

The qualifying tournament will be held from May 31 to June 5 and Cuba would be in Group B, where it would face baseball powers such as Colombia and Venezuela as well as Canada.

If the Cubans cannot make the games in Florida, they can try to qualify for the Olympics in Taipei in June.

Cuban baseball executives say all the athletes have been vaccinated against the coronavirus with two doses of Cuba’s own Soberana 02 vaccine and a booster dose of Soberana Plus.

Baseball returns to the Olympics this summer after a 13-year absence.