Diaz-Canel meets with activists in solidarity with Cuba 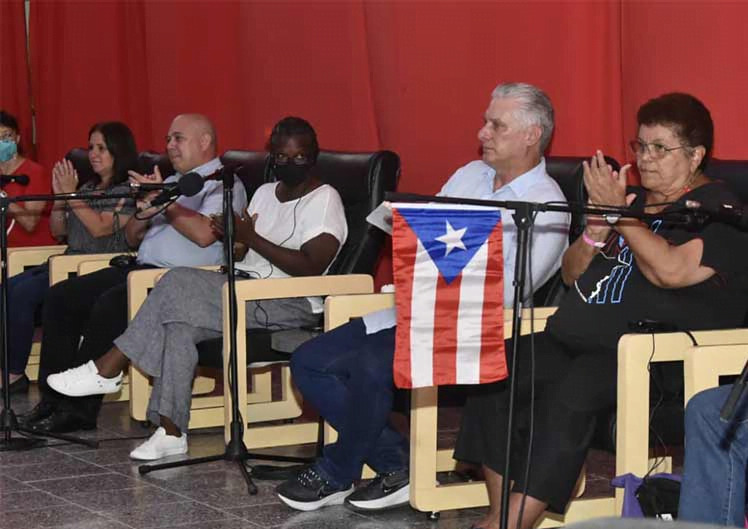 President of Cuba meets with activists in solidarity with our country

Havana, July 25 (RHC)-- Cuban President Miguel Díaz-Canel met Monday in the city of Cienfuegos with 200 U.S. and Puerto Rican activists of the solidarity movement with our country.

Díaz-Canel thanked the young Americans who last June, by organizing the People's Summit in Los Angeles, were the protagonists "of the real Summit of the Americas."   He acknowledged the permanent and systematic support they have offered for decades, and noted that the meeting takes place on a significant day for Cuba: the prelude to the commemoration of July 26 (69th anniversary of the assaults on the Moncada and Carlos Manuel de Céspedes barracks).

The solidarity action was held at the theater of the University of Medical Sciences of Cienfuegos, a city that will celebrate tomorrow the national act for the National Rebellion Day.

They are friends of four solidarity projects that over the years have given the Revolution their heartfelt support: Caravana Pastores por la Paz, the Juan Rius Rivera Boricua brigade, Partido Socialismo y Liberación and Brigada Venceremos, both from the United States, said the Cuban Presidency through its profile on the social network Twitter.

It is a privilege and honor to share this historic moment with Cuba, acknowledged the representative of the Pastors for Peace Caravan, Dorlimar Lebron Malave.

We are committed to continue fighting to end the blockade of the United States, one of the greatest genocides of humanity, added the activist.

Milagros Rivera spoke on behalf of the Juan Rius Rivera Brigade, who recalled that the COVID-19 pandemic prevented them from coming to Cuba in the previous two years, but did not stop solidarity, but rather multiplied it, she said.

Solidarity with Cuba was never and will never be quarantined, said Rivera.

U.S. representatives of the Venceremos Brigade and the Socialism and Liberation Party assured that they will not stop demanding an end to the attempts to destroy the Revolution and the unjust economic, commercial and financial blockade imposed by their country's government.

Some 10 thousand people from Cienfuegos will participate tomorrow, Tuesday, in the central act for the National Rebellion Day.

On July 26, 1953, a group of young people led by Fidel Castro, later identified by Cuban history as the Centennial Generation, attacked the Moncada (Santiago de Cuba) and Carlos Manuel de Céspedes (Bayamo) barracks, actions that the leader himself described as the small engine that started the big engine of the Revolution.