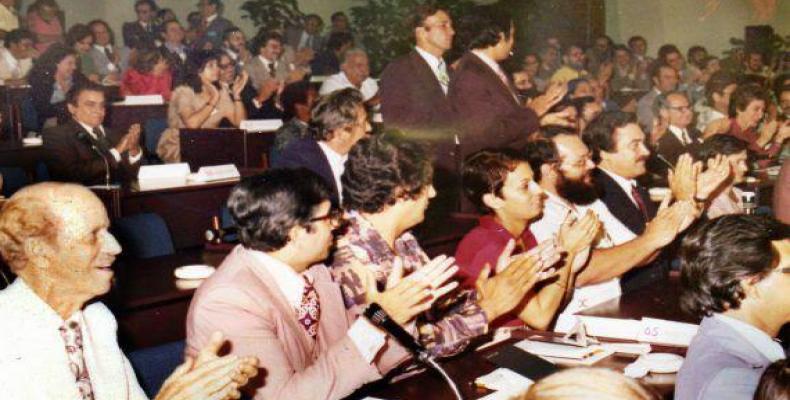 The Cuban government is convoking a conference of the Cuban émigré community. The Fourth Conference “The Nation and the Emigration” will take place from April 8 to April 10 in Havana. According to Ernesto Soberón Guzman, head of the General Direction of Consular Affairs and Attention to Cuban Residents Abroad (DACCRE) of the Cuban Ministry of Foreign Relations, the essential objective of the meeting is to continue deepening ties between Cuba and Cuban residents living abroad. He notes that the encounter will have special meaning for youth, who in spite of being born in another country, identify with, defend, and love the nation of their parents and grandparents; the meeting will be for them “an excellent opportunity to become closer to their roots.” He further maintains that the process of rapprochement between Cuba and the Cuban community abroad is “continuous and irreversible.”

Soberón Guzman observed that “the great majority of the Cuban community abroad, including Cubans resident in the United States, maintain regular ties with their country of origin.” He added that presently there are 166 associations of Cubans resident abroad in seventy-nine countries, “who defend the independence and sovereignty of Cuba and, in addition, speak against the blockade.”

The Cuban Ministry of Foreign Relations has asked the English-language department of Radio Havana Cuba to support the conference call to the Cuban emigration. Accordingly, we will be devoting two commentaries per week from now until April to themes related to Cuban emigration.

The process of rapprochement with the Cuban émigré community was initiated and promoted by Fidel Castro in 1978. On September 6 of that year, at a press conference with journalists tied to the Cuban community in the United States, nearly all of Cuban origin, Fidel invited participants of the community to participate in a direct dialogue. He declared that any representative of the Cuban émigré community, regardless of their ideological orientation, who is disposed to work seriously toward the solution of problems that affect the relations between the Cuban government and the Cuban community in the United States, would be able to participate in the conversations. The only condition that Fidel established was that “ringleaders of the counterrevolution” would not be able to attend.

As Elier Ramírez and Rodolfo Romero observe in 5 temas polémcios sobre Cuba, the 1978 convocation was made possible by the fact that President Jimmy Carter had eliminated U.S. government support of terrorist groups that operated against Cuba from U.S. territory, and the governments of the United States and Cuba had initiated dialogue concerning bilateral relations. Fidel observed in a press conference of November 21, 1978, that when the U.S. government was planning the assassination of revolutionary leaders and acts of sabotage, such a dialogue could not be contemplated by the Cuban Revolutionary Government.

In an article in Granma newspaper on the occasion of the fortieth anniversary of the 1978 press conference, Elier Ramírez reports that the émigré community arrived with a number of proposals for discussion, including: the possibility of creating a state organ or some institution in Cuba to attend to the affairs of the community; revision of article 32 of the Constitution, which proscribes double citizenship; the right of repatriation; the promotion of trips of educational, sport, and scientific interchange for youth of the émigré community; the possibility of participating in elections and other important political processes in Cuba; the right to vote and be elected; the right of participating in some form in political organizations and mass organizations; the right of possession of a Cuban identity; consideration of the possibility of a publication directed to the Cuban community abroad; and facilitating the contribution of technicians, scientists, professionals, and qualified workers abroad to the economic development of Cuba. Many of these proposals of the émigré community have been implemented over the years.

As a result of the conversations, both sides agreed to the liberation of 3000 persons imprisoned for crimes against the security of the Cuban state and more than 600 that had violated emigration laws. Here it should be observed that the although the term “political prisoners” was used in that era, those imprisoned were not “prisoners of conscience,” that is, persons imprisoned for expressing counterrevolutionary opinions. They had been imprisoned, following judicial processes, for violence against persons, sabotage, and efforts at political destabilization in the paid service of a foreign power, activities that are defined as criminal in the great majority of countries of the world. Moreover, these crimes were being committed against the security of the Cuban nation and people in the context of a climate established by U.S.-sponsored terrorism directed against Cuba. The release of the “political prisoners” in 1978 can be interpreted as a gesture by the Cuban government that was intended to signal a new era in the relations between the Cuban government and the Cuban émigré community.

At the conclusion of the December 8 dialogue, Fidel declared that “we do not have any doubt that what we are doing is highly positive, highly constructive, highly moral, and that it will result in benefits for all Cubans, of the Cuban community in the country and the Cuban community abroad. . . . Some of you have said that we are writing a page in history, and I agree with that . . ., because history always records the things that have some human, social, and political value, and we believe that this has value, a high human, social, and political value.”

The 1978 dialogue provoked a split within the Cuban émigré community between, on the one hand, those who favored the normalization of relations between the U.S. and Cuban governments and the continuation of the dialogue between the Cuban government and the Cuban emigration; and on the other hand, those who favored a continuation of the status quo of hostility. The Cuban-American extreme Right went on the attack, and the defenders of dialogue suffered reprisals. Some were dismissed from their positions of employment, and others were victims of violence. In that period, 68% of the activities of anti-Cuban terrorist groups occurred in the United States.

Although Jimmy Carter took initial steps to normalize relations between the United States and Cuba, the hostility of the subsequent administrations of Ronald Reagan and George H.W. Bush prevented the continuation of the dialogue between the Cuban government and the Cuban emigration. However, the road initiated by the Dialogue of 1978 was retaken in the 1990s.

We will continue to discuss the relation between Cuba and the Cuban émigré community in subsequent commentaries.

On behalf of Radio Havana Cuba, this is Charles McKelvey sending warm greetings to Cuban nationals and their descendants living in seventy-nine nations of the world.