Ecuador: Who is to blame? 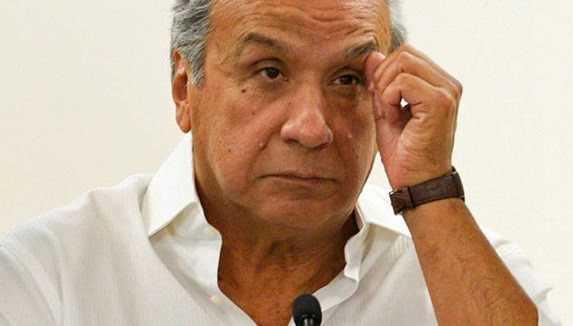 Ecuador: Who is to blame? This guy... among other idiots!

Outgoing Ecuadorian President Lenín Moreno has dominated the news and generated headlines due to the devastating health and economic situation of his country.

Moreno participated in a forum of former conservative leaders held in Miami, while being embroiled in a scenario that he himself appreciates because it embraces neoliberalism or criticizes Venezuela and those who follow the beliefs and policies of former President Rafael Correa.

He attributed to Venezuela the alleged induction of the protests in Colombia, with no evidence, because it does not exist, something that Venezuelan Foreign Minister Jorge Arreaza denounced from Caracas

In his speech at the so-called "Forum for the Defense of Democracy in the Americas," Lenin Moreno blamed his compatriots for not complying with his demands.

Then, omitting the results of his questioned administration, he ignored the fact that Ecuador presents a severe economic crisis aggravated by the COVID-19 pandemic, an inheritance that will be received by the person who co-governed with Moreno, the neoliberal banker and president-elect, Guillermo Lasso.

The dollarized economy of the South American nation was already plunged into a deep crisis before the pandemic, due to ridiculous oil prices and high indebtedness.

On May 24th, Lasso will receive a country in bankruptcy and social dissatisfaction for measures imposed to get a 6.5 billion loan from the International Monetary Fund.

Lasso's great challenge will be how to execute the planned adjustment in the midst of so many emergencies, since the economic contraction last year was 7.8 percent.

With a third of the population living in poverty and close to five million Ecuadorians earning less than the basic salary, COVID-19's poor management made the situation even more complicated.  According to figures from the International Monetary Fund, Ecuador, the second country in South America with fewer tools to cope with such a sanitary emergency, allocated 1.2% of the Gross Domestic Product to fight COVID-19 in 2020.

Moreno’s administration was not exactly generous when approving spending figures in the face of the pandemic, but it did so in the nomination of a Health Minister, changing him four times.

Ecuador has accumulated more than 395,300 cases since the beginning of the pandemic, deaths exceed 19,000 and hospitals are nearly overwhelmed.

But no one in the government will be held accountable for the losses, as the fault lies squarely in others, or at least is the president’s opinion, since he said : "I wish I had a better people!"