Five years after his return, Gerardo Hernandez is proud and happy 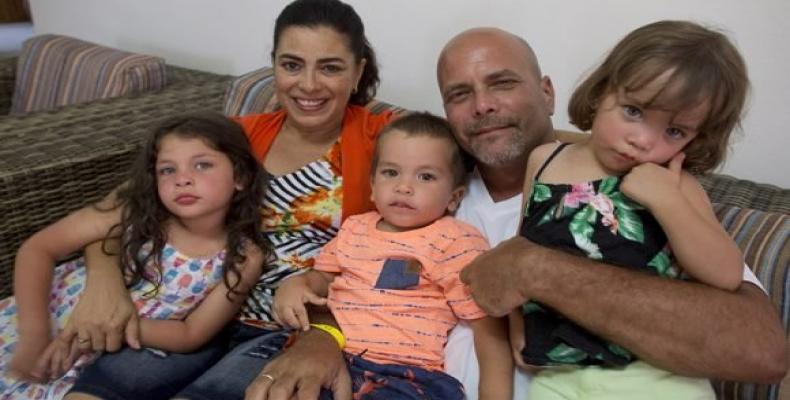 December 17th, 2019, marked five years since the return home of Ramon Labañino, Antonio Guerrero and Gerardo Hernandez. The three remaining Cuban Five who had not been released by U.S. authorities by the end of 2014.

Rene González and Fernando González had returned earlier. The day marked the fulfillment of a dream long-awaited by the Cuban people:  the return to the homeland of all the Five anti-terrorist fighters unjustly imprisoned in the U.S.  for monitoring groups that planned and carried out terrorist actions against the island.

In statements to Radio Havana Cuba, the Hero of the Republic of Cuba, and vice-rector of the Raul Roa Higher Institute for International Relations, Gerardo Hernandez, said he would never forget that day, coming back home after serving 16 years in U.S. prisons.

Twenty days after his return, his happiness and that of his wife, Adriana Perez, was even greater when the couple had their first child, Gema.

“The story is told in the documentary Gema de Cuba… “Gem of Cuba.” This was unique since it was the first time in the history of the U.S. that a federal prisoner was allowed to donate his sperm to conceive a child,” said Gerardo.

He added that December 17, 2014, not only was a happy day, coming back home after so many years but because he was also among the few people that knew that his wife was pregnant. Twenty days after that day, he had Gema in his arms.

Gerardo Hernandez had a message for the youth of Cuba and the world: “Never give up, no matter how difficult the times may be, or how many troubles one may have. There are always people who are in a worse situation than that of one´s self.”

Gerardo said that when some people ask if he regrets the loss of sixteen years of his life, he says that he got out of prison without feeling hatred and that he has not become a bitter person.

Five years after his return, Gerardo is 54.  He feels that reality has exceeded all his expectations and dreams.  He and Adriana are the proud parents of three children:  Gema, and the twins, Ambar and Gerardito.

“I am here in Cuba, living with my family, with my people, happy and proud of what I did,” he said.