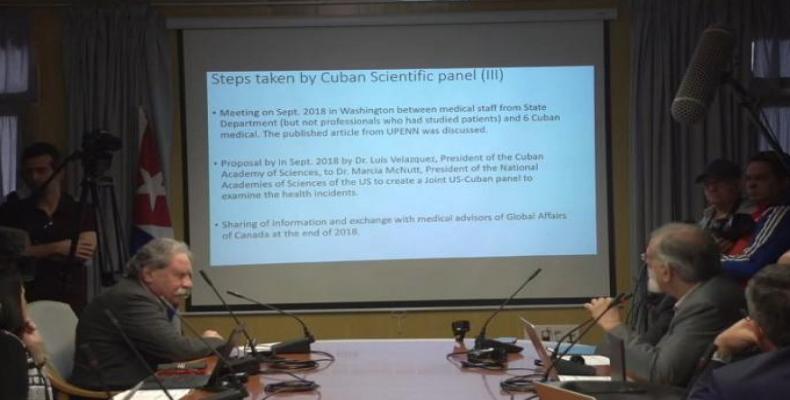 The Cuban Academy of Sciences, in coordination with the Cuban Center for Neurosciences began on Monday a forum to debate the multiple facets of scientific research about the alleged health incidents reported by the U.S. embassy diplomats since late 2016.

Is there a Havana Syndrome? is the name of the international scientific event, reports Juventud Rebelde newspaper.

The meeting is being streamed on the Cuban Public Health Ministry's Youtube channel and its goal is "to reach the truth with a frank scientific discussion," said Dr. Mitchell Valdés-Sosa, director of the Neurosciences Center.

Valdes highlighted the different opinions expressed in the forum and the critical and respectful nature with which scientific evidence is being discussed "to reach the best conclusions."

The specialist noted that this was not the spirit that prevailed since the affections were made known, since Washington used the issue for political purposes to accuse Cuba as an aggressor, without any proof of the facts.

The Trump administration has prevented the specialized community continuously in both countries from discussing the issues on a scientific basis, he said.

Along with Cuban host experts, specialists from the United States, Canada, New Zealand, and the United Kingdom are taking part in the event.

The scientific evidence presented on the first day disregards the theories put forward by the U.S. State Department as justification for the setback in bilateral relations with Cuba.

With the primary theory of "sonic attacks" discredited, the campaign against Cuba evolved. Now the press call it "the Havana Syndrome."

The event is concluding this Tuesday.