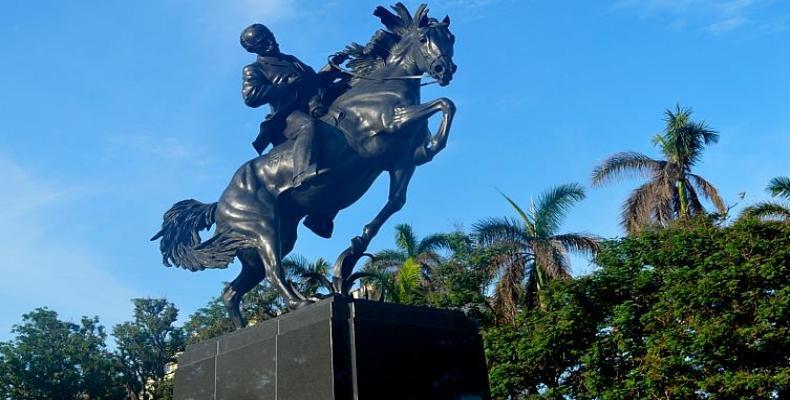 With the attendance of Cuban President Raúl Castro, a Statue of National Hero José Martí was unveiled Sunday morning to mark an anniversary of his birth.

The equestrian statue, which was originally conceived by US’s Anna Hyatt Huntington in the 1950’s, commemorates the 165th anniversary of Martí’s birth, January 28th. The bronze piece unveiled Sunday morning is an exact replica of the one located in New York’s Central Park. The ceremony was attended by high-ranking Cuban government officials as well as Cuban intellectuals residing in the United States who contributed to the project.

Havana Historian, Eusebio Leal, delivered the opening address, highlighting the beauty of the sculpture complex, featuring the scene in which José Martí was killed in combat in Dos Ríos on Mary 19th, 1895. Leal also evoked the beginning of the wars of independence against Spain whose 150th anniversary Cubans are marking in 2018, the 60th anniversary of the Cuban Revolution as well as the 500th anniversary of the founding of Havana. The equestrian bronze statue was modeled and cast at the Art Museum of the Bronx with the decisive cooperation of deceased museum director Holly Block.

The Museum’s Trusteeship Board President, Joseph Mizzi, said that it was an honor to donate the statue to the Cuban people, highlighting that during the project they learned of José Martí’s commitment to Cuban independence and of the national hero’s keen-sighted work portraying the reality of the United States. He also thanked more than one hundred donors who made it possible and specially Holly Block, who was instrumental in the project’s implementation. Also on hand at the ceremony was José A. Velázquez Zaldívar, representative of New York’s Mayor’s Office.