Statue of José Martí unveiled at Cuban Embassy in Washington 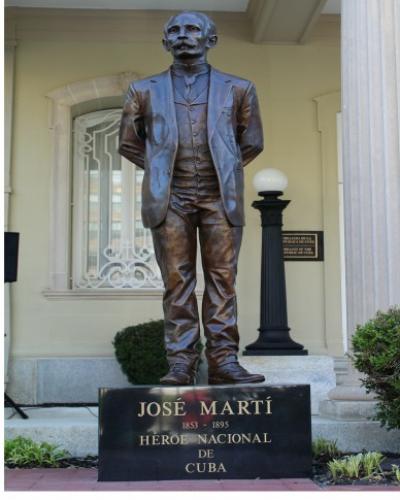 Washington, July 2 (RHC)-- A bronze statue of Cuban National Hero José Martí was unveiled Monday at the Cuban diplomatic mission in the US capital.

The piece by National Fine Art Award winner, Cuban sculptor José Villa Soberón, is inspired by one of the few photos of the Cuban Independence leader ( (1853-1895). Cuban ambassador to the US, José Ramón Cabañas, explained that it shows a reflexive and preoccupied José Martí, a Martí who tries to understand reality in order to change it. ‘The hero in the statue is the one who devoted himself to organize the war against Spanish rule among Cuban cigar rollers in Ybor City, in the southern city of Tampa;  the one who walked in Jamaica or came to Washington DC in 1891’, the diplomat said.

Cabañas pointed out that unveiling of the piece, cast in Miami, Florida, by artist Lázaro Valdés and the Asubronze team, coincides with the 130th anniversary of the release in New York of La Edad de Oro (The Gold Age), a publication that the Cuban hero dedicated to the formation of the young generations.

The opening also coincides with an exchange of letters between the governments of Cuba and the United States on July 1, 2015, announcing the reestablishment of bilateral diplomatic relations, which took effect on July 20, 2015 with the embassy’s reopening; with the 100th anniversary of the Cuban embassy in Washington, the 60th anniversary of the Cuban Revolution and of Cuban Revolution leader Fidel Castro’s visit to the diplomatic mission.