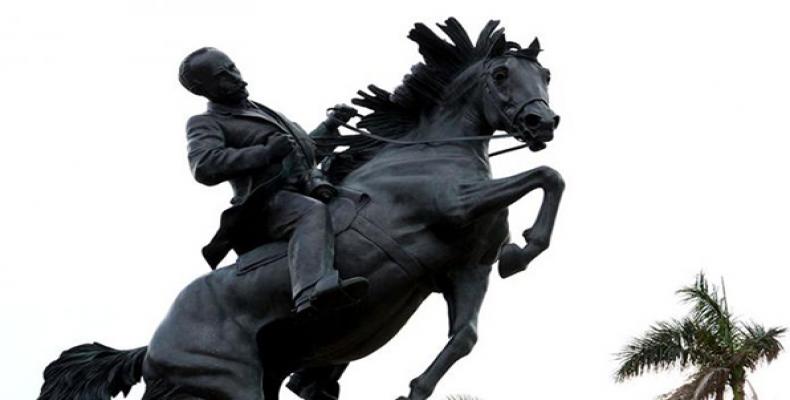 Havana, January 28 (RHC)--   A replica of the equestrian statue of Cuba’s national hero Jose Marti displayed in New York City’s Central Park was officially unveiled Sunday morning in the Cuban capital on the occasion of the 165 anniversary of Marti´s birthday.

President Raul Castro presided over the ceremony. On hand were also a bipartisan delegation of US lawmakers that included Barbara Lee and Karen Bass, both Democrats from California, and Republican Roger Marshall of Kansas.

Speaking at the observance, Havana´s Historian Eusebio Leal, summarized the extraordinary life of Jose Marti, and stressed the validity of his ideas of independence, and Latin American unity.

Leal thanked the hundreds of donors whose generous contributions made possible the materialization of this tribute, and appreciated the assistance of New York City Mayor Bill de Blasio, and of the late Holly Block, former executive director of the Bronx Museum.

During the unveiling, Joseph Missi, Chairman of the Bronx Museum´s Board, praised the friendship between the peoples of Cuba and the United States and all the efforts that were undertaken for the completion of the project.

On behalf of the Office of the Mayor of New York City, José Velazquez Zaldívar noted that the replica of Marti´s equestrian statute in Havana not only marks his 165th anniversary, but it also constitutes an opportunity to share with new generations the Cuban hero´s historic legacy in the quest of independence.

The original 5.6-meter high bronze sculpture is the work of American sculpture Anna Hyatt Huntington. It depicts the moment of Marti´s death in action in the locality of Dos Rios in Eastern Cuba on May 19, 1895.

The replica in Havana is located at the “March 13 Park”, facing the Museum of the Revolution (former presidential palace), in Old Havana.

As part of the celebrations in Cuba to mark Marti´s 165th anniversary, president Raul Castro, accompanied by thousands of young people, participated Friday evening in the traditional “March of the Torches” that left Havana´s University grand staircase to la Fragua Martiana, former location of a quarry, where 16 year old Jose Marti was forced to work while he was imprisoned by the colonial regime.