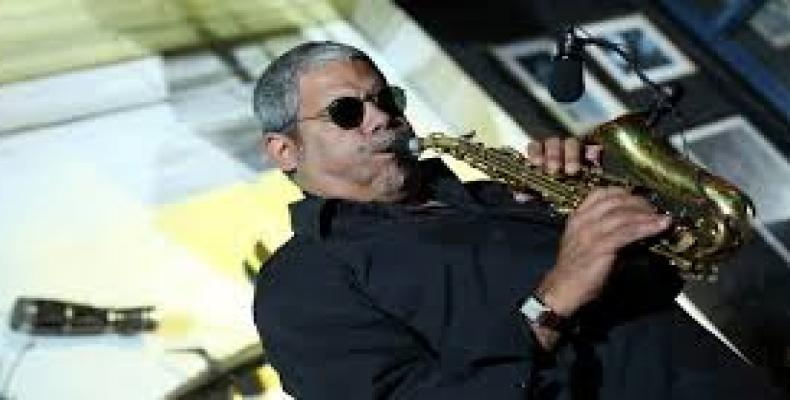 Renowned Cuban jazz saxophonist César López gave a concert Wednesday, streamed on social media, as part of the joint initiative launched on March 24 by the Cuban Music Institute, the Cuban Ministry of Culture and the Radio and Television Institute.

Also, a composer, López is considered one of the best exponents on jazz music in Cuba.  He has developed a successful artistic career on the island as well as abroad. He has released 12 albums.

César López started studying music at the age of 10. Only three years later, he won the 1st Prize in the Cuban National Sax Contest. In 1985 he got a scholarship at the National School of Arts and, simultaneously, started his professional career with renowned Cuban musician Bobby Carcasés, who introduced him to Latin Jazz.

In 1988, due to his outstanding conditions as a sax player, with only 19 years he was chosen by Maestro Chucho Valdés to play the sax for the legendary Cuban band IRAKERE, with which he developed a fruitful, 9-year professional career, performing at the most prestigious festivals, theaters and clubs worldwide. He had also the chance to share the stage with Jazz masters like Herbie Hancock, Wayne Shorter, Chick Corea, Winston Marsalis, Michel Camilo, Paquito D’ Rivera and others.

In 1997, César López formed his own band, “Habana Ensemble”.

An award-winning musician, César López was granted the Prize to the Best Jazz Album for the work “Andante”, released under the BisMusic label, at the major event for the Cuban music industry, Cubadisco in 2006.

In March 2012, sax player Cesár López and Habana Ensemble celebrated 15 years of work with the release of the DVD “LIVE”, under Bis Music label, in March 2012, which was granted the Cubadisco Prize to the Best Live Recording in 2014.

César López was awarded the coveted Cubadisco prize again in 2015 and 2016, for his albums “Entre Cuerdas”, released under Colibri label and compiling his own classic music compositions with the Orchestra of Liseo Mozarteum, and “Sonajero”, released under Egrem label.

In 2018, he joined to ORQUESTA AKOKAN, formed by American and Cuban musicians playing deeply soulful mambo of the 1940’s and 1950’ with the rich compositional styles of Havana, New York, and beyond. Their first album “Orquesta Akokan” (Deptone Records) was awarded various prizes like the Songline Music Award 2019. It was also nominated to the Grammy Best Tropical Latin Album in 2019 and the 2019 Billboard Tropical Album of the Year.

César López also takes part in the "CUBAN SAX QUINTET". Their first album “Saxofones Live Sessions” was awarded Cubadisco’s First Prize in 2019 and it was nominated to the Best Instrumental Album of the Latin Grammys 2019.

The virtual concerts aim to take art, particularly good Cuban music, directly to Cuban and foreign audiences in their homes, in times of the Covid-19 pandemic.