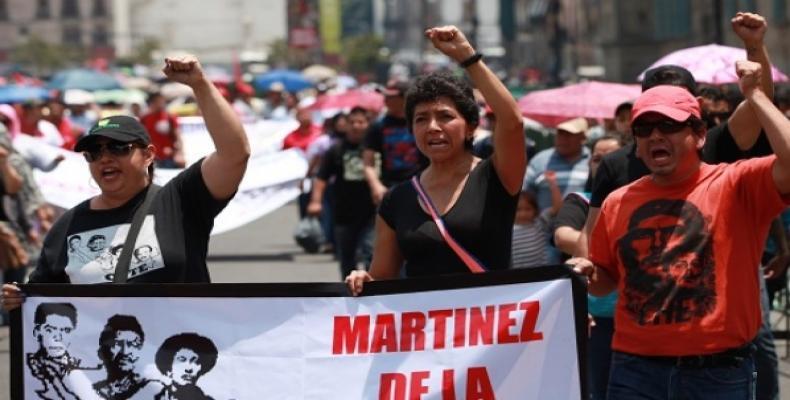 Mexico City, August 23 (RHC)-- Students in Mexico returned to school on Monday, but dissident teachers were not in the classroom to greet them.  In at least four provinces and Mexico City, they were in the streets protesting controversial educational reforms that the government refuses to renegotiate.

Teachers of the National Coordinator of Education Workers, or CNTE, have refused to start the school year as scheduled in the capital city and the southern Mexican states of Oaxaca, Chiapas, Guerrero, and Michoacan, where the union has a strong presence and the conflict between striking teachers and the government has been most heated in recent months.

“In the face of a lack of response from the government, the CNTE confirms its initial agreement: keeping up the indefinite strike,” Enrique Enriquez Ibarra, a leader of the union’s Mexico City chapter, told El Universal.

Another CNTE leader, Gonzalo Martinez Villagran, argued, “It’s better to lose a few days of class than public education,” according to La Jornada.  The union is stuck in a deadlock with authorities over contentious reforms to public education that many view as an attack on teachers and organized labor.  Teachers gave an ultimatum to refuse to go back to classes if the last week's negotiations with the Interior Ministry and education authorities did not bear fruit.

Meanwhile, Mexican Education Minister Aurelio Nuño threatened that there will be no further dialogue unless the teachers return to school.

The dissident teachers claim that the government has not responded adequately to their demands, including calls for their jailed leaders to be released. Several detained teachers, dubbed “political prisoners” by the union, have been released from jail in recent weeks, but at least two dozen more remain behind bars, according to local media.

The CNTE has vowed to ramp up highway blockades, marches, and other forms of protest, particularly in the four most embattled states, as well as Mexico City. The dissident movement’s demands have focused on the defense of public education and transformation of the education model as a check against creeping privatization.

The union has long argued that the neoliberal education reforms – introduced by President Enrique Peña Nieto in 2013 – fail to respond to the unique education needs of students and teachers in rural and Indigenous-majority area, like many communities in Chiapas and Oaxaca. They also argue that mandatory teacher evaluation procedures are ineffective and unfairly penalize teachers.

Mexican Education Minister Aurelio Nuño urged teachers to go back to their classrooms peacefully to get the school year started off without a hitch. He heralded the start of the school year as a historic moment marking “another cycle in Mexico’s transformation,” El Universal reported.

Weeks of negotiations between government officials and representatives of the CNTE have failed to produce concrete results, and the teachers hold authorities responsible for thousands of empty classrooms on Monday. The dissident educators accuse the federal government of supporting dialogue only in its rhetoric, while remaining unwilling to listen to teachers’ demands and follow through with meaningful agreements.

Teachers of the CNTE have been on strike for over three months after launching the job action on May 15. The conflict become intensely more heated after security forces violently repressed on protests in Nochixtlan, Oaxaca, on June 19, leaving at least 10 dead and injuring dozens of others. The crackdown sparked a wave of solidarity protests in cities across Mexico and internationally to bring attention to how the government repeatedly turns a blind eye to human rights abuses.

A march is planned in Mexico City on Monday at 5:00 p.m. from the main square to the so-called “anti-monument” for the 43 Ayotzinapa students, a memorial to the disappeared students erected last year without government permission. Marches are also set to take place in cities in Oaxaca and Chiapas, while more road blockades are scheduled for Tuesday and Wednesday this week.

According to numbers reported by La Jornada, of the nearly 26 million students who should be headed back to school on Monday, some seven million will be without a teacher due to the ongoing strike.