No Deal With Mexican Government as Striking Teachers Stand Firm 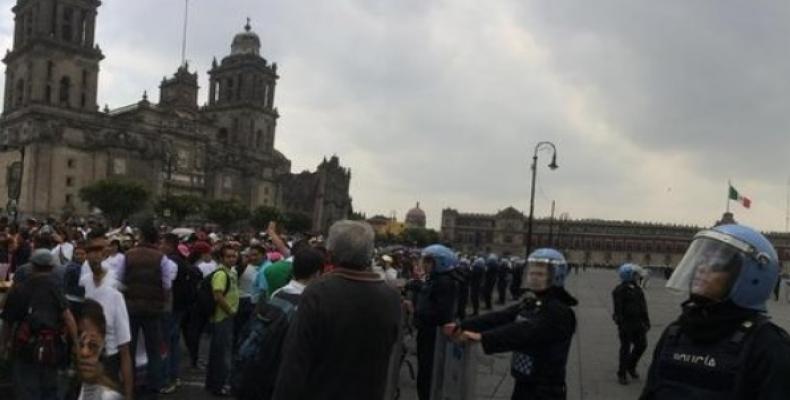 Mexico City, June 29 (RHC)-- A second meeting between striking Mexican teachers and the government in Mexico City wrapped up on  as authorities called on unions to end the blockades in the southern state of Oaxaca, the Mexican news agency Notimex reported.

Officials from the government of Enrique Peña Nieto insist that for talks to continue, protests against neo-liberal education reforms -- which have been met with a repressive crackdown -- must end.

After a marathon meeting of nearly seven hours, leaders of the CNTE union and Interior Minister Osorio Chong managed to reach a consensus that in the immediate term, the dialogue process will focus on ensuring justice for Nochixtlan, where a violent police crackdown on teacher protests beginning June 19th left at least nine people dead in the town of 15,000.

Teachers agreed to postpone their demands for a reversal of neo-liberal education reforms in the name of addressing the common goal, La Jornada reported.  Otherwise, both sides have remained firm in their positions. Teachers have expressed three key demands, which are for the neo-liberal education changes—including mass layoffs—to be overturned, for a new and more participative education model and for reparations for damages.

On the other hand, Chong reiterated after the meeting that the demand for education reform is not one that can be met in the talks, arguing that it is a constitutional matter.  The minister said that the talks had achieved progress insofar as both sides agreed to “work to create the conditions” to solve the problems at hand.

The meeting followed a first session between the CNTE and government officials last week that came amid high-running tensions in the immediate aftermath of the deadly violence in Nochixtlan and accusations from detained teachers that police had threatened them with forced disappearance.  With no agreements in sight after the first lengthy meeting, union leaders vowed to keep protesting until their demands are met.