Violent Clashes Between Teachers and Police in Oaxaca, Mexico 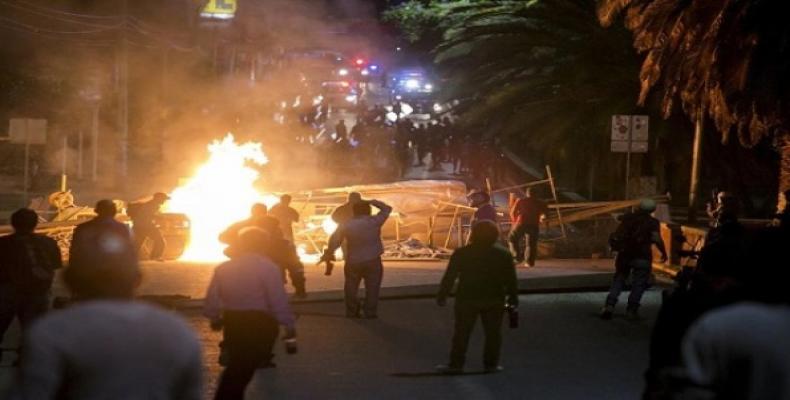 Mexico City, June 13 (RHC)-- The ongoing conflict between teachers and the government of Mexico reached a boiling point over the weekend in the city of Oaxaca, with nearly 500 protesters violently evicted from a public square by at least a thousand police officers.

The prominent Mexican newspaper La Jornada reported on Sunday that teachers belonging to the dissident CNTE union were occupying the Oaxaca State Institute of Public Education.  The building is located in the historic center of the capital, and the occupation was part of the general strike to protest the education reform.

Officers began firing tear gas to disperse the teachers, who responded by throwing stones but were ultimately forced to leave the building.  They then went to the main square of the city, where they began to build barricades to resist the police onslaught.  Greatly outnumbered, they were then forced out of the square as well.

Teachers are also protesting the detention of the CNTE’s leader in the state, Francisco Villalobos, who was sent to a federal prison on charges of aggravated robbery.  CNTE teachers, who are also occupying a public square in Mexico City, have said the detention of Villalobos is “a provocation by the government of Enrique Peña Nieto."

Meanwhile supporters of the dissident leader in Oaxaca have denounced the arbitrary detention of at least seven union leaders as part of what they called “schematic government repression against teachers."

Peña Nieto unveiled an education reform in 2013 as part of a set of 11 neo-liberal structural reforms implemented in his first 20 months of power.  Since then teachers have been protesting, mostly in the violent southeast states of Oaxaca, Michoacan, Guerrero and Chiapas, where millions of children have been affected by the strikes.

The controversial law imposes teacher evaluations in order to determine which applicants will be chosen to fill open posts in the public school system nationwide.  Critics say the testing only justifies mass layoffs and does not effectively measure teaching skills, like the special knowledge and demeanor needed to teach in rural areas and Indigenous communities.