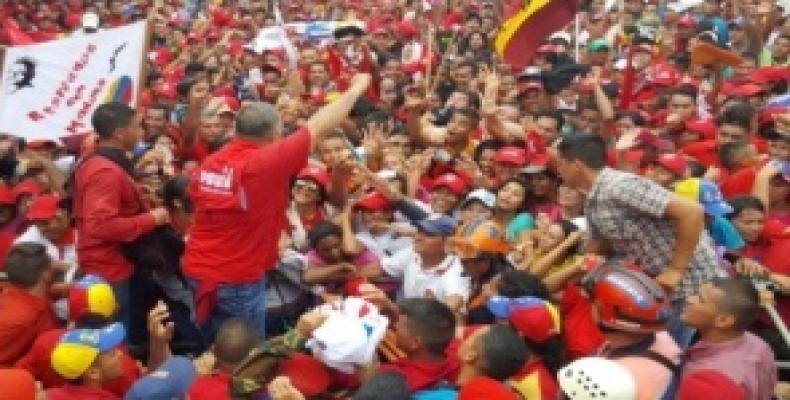 Caracas, September 8 (RHC)-- Thousands of Venezuelans took to the streets of Caracas and other major cities across the country Wednesday, calling for peace in their country and rejecting right-wing opposition plans to destabilize the government of President Nicolas Maduro.

The march was called by the ruling United Socialist Party of Venezuela, or PSUV, and was attended by political representatives, activists, civil society organizations, grassroots movements and the general public.

Diosdado Cabello, the first vice president of the PSUV, said that the government and the revolutionary people must remain on the streets in defense of peace and national stability.

Meanwhile, hundreds of right-wing opposition members have gathered in the city of Los Teques, capital of Miranda State, to demand the National Electoral Council, or CNE, to speed up a recall referendum against President Maduro before the end of 2016.

Hard-line opponents like Maria Corina Machado have been calling for "civil disobedience" if the CNE doesn't allow them to conduct the referendum before the end of 2016. The electoral body, however, ruled that a vote won’t be possible until 2017.

Last week, the opposition called for a mass demonstration in Caracas which they loudly promoted as the "taking of Caracas," centered on demands for the ousting of Maduro's socialist government. Hundreds of thousands of anti-government protesters flooded the streets of the capital amid widespread economic problems.

Authorities said they managed to prevent violent actions and a coup that was planned for that same day, Sept. 1. Officials also reported that intelligence forces seized different caliber guns, explosives and other weapons that were going to be used for targeted killings of state officials and activists supportive of the Maduro administration.

Although it was not reported by Western mainstream media outlets, thousands of pro-government supporters also staged a large counter-rally to defend President Maduro.

Under the Venezuelan constitution, a recall referendum must be held by Jan. 10 for new presidential elections to be triggered. However, the right-wing opposition did not begin gathering signatures from citizens in support of the recall referendum in a timely fashion to ensure a referendum before the end of the year. Based on previous experiences, the process takes several months from beginning to end.