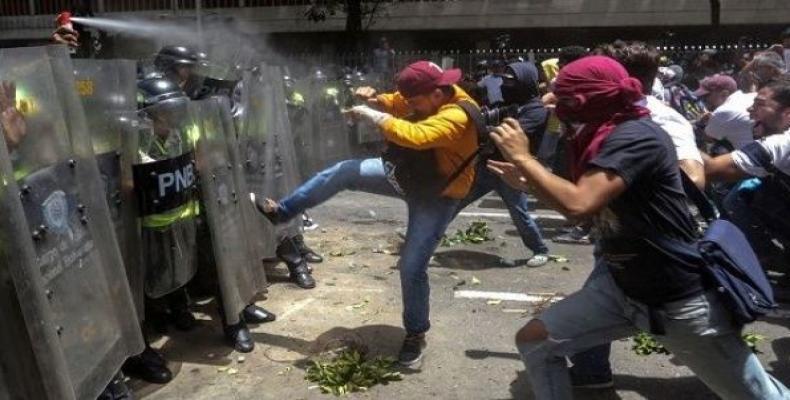 Caracas, April 7 (RHC)-- In Caracas, the Venezuelan capital, Diosdado Cabello presented evidence of a coup attempt planned by the opposition with terrorist acts and looting.  The Venezuelan socialist lawmaker and former head of the National Assembly said that the country's right-wing opposition has been harboring a coup plot and attempting to foment violence to justify foreign military intervention amid a tense political standoff between the government of President Nicolas Maduro and its opponents.

During his program "Con el Mazo Dando" broadcast on state television, Cabello presented audio recordings that provided evidence of a coordinated opposition destabilization plan that included violence in the streets and military attacks in Caracas, with the aim of creating a political scenario that would favor military intervention by the United States and the ultimate removal of the Maduro government.

"They implore the intervention of foreign military forces ... those opposition supporters who don't have the balls to carry out a coup as they want, those opposition supporters who don't have the courage to stand as it should be and they send someone else to shed blood for them and afterwards skate over the blood of others and celebrate that they toppled Maduro," said Cabello, vice president of Maduro's United Socialist Party of Venezuela or PSUV.

The evidence Cabello presented included a conversation between security agents that mentions opposition figures including Julio Borges, president of the National Assembly; Roberto Enriquez and Oswaldo Alvarez Paz from the Copei party; Eduardo Vetancourt, former agent of the DISIP, an old intelligence organization in Venezuela; Colonel Zomacal Hernandez and U.S. Senator Marcos Rubio.  One of the agents also mentions he has 32 kilos of explosives for the violent attacks that would be used for an opposition protest march.

"We are not going to surrender and they will never step on Miraflores again, because anyone who betrays his homeland and is imploring an invasion of foreign forces must be treated as an enemy in his homeland, as a traitor to his homeland," said Cabello.  He said the Venezuelan opposition "is looking for a fact that triggers an action that allows an invasion of Venezuela."

In 2014 violent protests called "guarimbas," or violent street blockades, carried out by the opposition were responsible for the deaths of 43 peoples and more than 800 wounded.