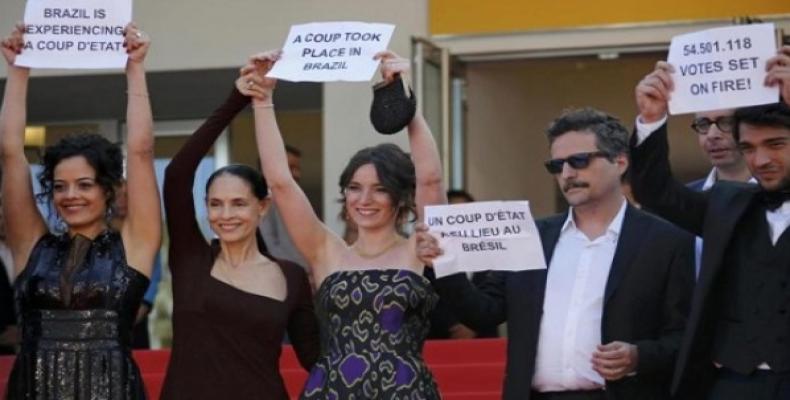 Brasilia, September 16 (RHC)-- The director and cast of the highly-celebrated film "Aquarius" have protested the coup against Dilma Rousseff while representing Brazil at Cannes.  Brazilian film critics say that the critically acclaimed “Aquarius” was passed over for an Academy Award nomination because of the outspoken director's public condemnations of the lawmakers who orchestrated the parliamentary coup against President Rousseff, according to Variety Magazine.

The country’s embattled Oscar’s selection committee nominated David Schurmann’s “Little Secret” as Brazil's offering for Best Foreign Language Film at the Academy Awards in February 2017.  At least two films dropped out of the running for the prized spot in protest of the appointment of film critic Marcus Petrucelli to the selection team.

Petrucelli, who has publicly criticized Aquarius director, Kleber Mendonca for his denunciation of Brazil's unelected President, Michel Temer, who was part of a cabal of conservative politicians who moved against the twice-elected Rousseff.

In social media posts, Petrucelli previously accused Mendonca of embarrassing Brazil at the Cannes Film Festival.  Mendonca and the cast of Aquarius had staged a protest on the red carpet at Cannes in May just days after Rousseff's was suspended from office on allegations of corruption. She would subsequently be impeached on August 31st.  Cast members held up signs with messages such as “Brazil is experiencing a coup d’etat.”

Onlookers at Cannes responded to the protest with applause, while Petrucelli dubbed the claim of a coup a “lie.”  Schurmann, director of the Oscar submission “Little Secret,” told Variety that Brazil’s Oscar selection process fell victim to the country’s political climate, which elevated pressures to single out a film with “a political angle and agenda,” which may not necessarily the best film.

Previously, Mendonca told Variety that there was a great deal of speculation that “Aquarius” would be “sabotaged by the illegitimate government.”  “Aquarius” tells the story of an aging music critic, played by Sonia Braga, who resists pressure from a bullying property developer to sell her apartment with a stubborn and humorous air that spikes tension through the course of the film.

Critics have described the film as a metaphor for some of Brazil’s deep-seated problems, such as corruption.  Although pushed out of the Best Foreign Language Film category, “Aquarius” could still have a shot at making it to the Oscar’s with Sonia Braga as a nominee for best actress in a leading role after her performance was highly celebrated at Cannes.

The controversy over the Oscar’s selection comes less than two weeks after the vote in the Senate to definitively remove Rousseff from office  and install Michel Temer as unelected president.

One of the first contentious moves by Temer’s interrim government was to axe the Ministry of Culture, folding it into the Ministry of Education for the first time since the offices were separated in 1985 after the fall of the dictatorship.