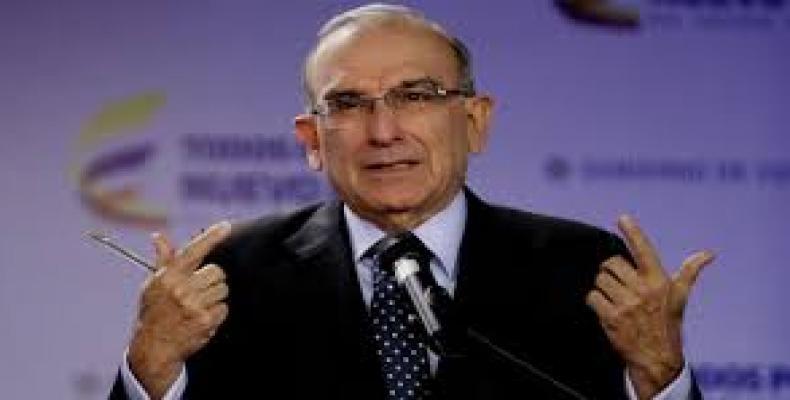 Bogota, October 4 (RHC)-- Colombia's chief negotiator at the peace dialogues with the country's leftist rebels has offered his resignation, hours after Colombians narrowly voted down the peace deal in a non-binding plebiscite Sunday.

It will now be up to Santos to decide if he accepts de la Calle's resignation, although the government's top negotiator said that he is willing to continue working wherever needed.

The surprising results — which were contrary to all exit polls that predicted the "Yes" vote winning easily — are showing that the areas most affected by the conflict have overwhelmingly voted "Yes" for peace. For example, in the heavily affected area of Choco – with 95 percent of the vote counted – 79 percent voted "Yes." The Caribbean provinces have also voted "Yes."

The plebiscite was non-binding and now the Colombian Congress can still elect to pass the laws necessary to comply with the accords, although the amnesty law was built into the plebiscite, and without its passage the agreement is basically null.

The FARC-EP had consistently called for a constituent assembly instead of a plebiscite, arguing that an assembly would be much more representative and would guarantee the participation of the most marginalized and affected peoples in Colombia and would go beyond a simple yes or no vote.

In light of the vote, the FARC-EP said in an official statement that it will continue to pursue peace, using its "word as a weapon of construction towards the future," and concluding that it is confident peace will prevail.

President Santos said he will abide by the vote but will not give up on peace, sending negotiators back to Havana to meet with their FARC-EP counterparts.  And he reiterated that the bilateral cease-fire between the FARC-EP and the government will remain in effect.

Colombians went to the polls to vote on the approval or rejection of the peace agreement reached between the government of Santos and the FARC-EP guerrillas after nearly 4 years of negotiations.

The question posed to the population was: “Do you support the final accord for the end of the conflict and the construction of stable and lasting peace?”

The final text of the peace deal was signed on September 26th by President Santos and FARC-EP leader Timoleon Jimenez, with numerous regional leaders and heads of state in attendance.  The historic act is now clouded by the outcome of the plebiscite.