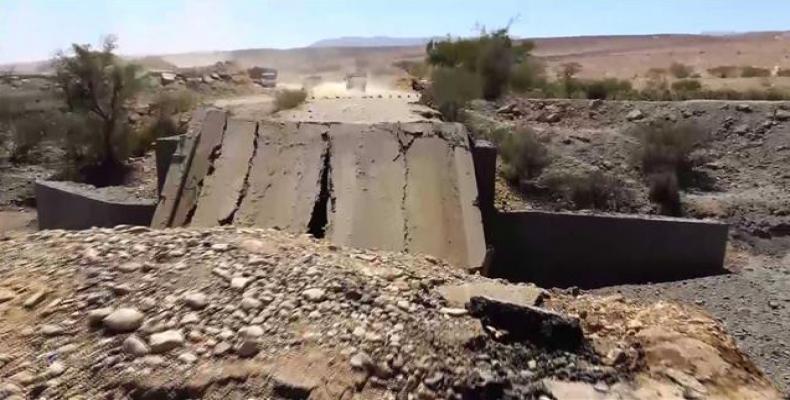 Three people lost their lives on Thursday, when Saudi fighter jets struck a bridge in the Harf Sufyan district of Amran province, located 53 kilometers northwest of the capital Sanaa, Yemen’s Arabic-language al-Masirah television network reported.  Another three people were killed in the Baqim district of Sa’ada when Saudi warplanes struck a residential building.

The fatal aerial attacks came on the same day that Yemeni army soldiers and fighters from allied Popular Committees targeted a gathering of militiamen loyal to the resigned Yemeni president, Abd Rabbuh Mansur Hadi, in the Maslub district of the country's northern province of Jawf.

Informed sources, requesting anonymity, said at least 15 Saudi-backed gunmen were killed in the attack, while 30 others suffered injuries.

A 72-hour ceasefire went into effect in Yemen shortly before Wednesday midnight to allow aid to reach families trapped in towns and villages cut off by months of fighting between warring factions.

In another development, United Nations sanctions monitors have told the Security Council that the October 8 Saudi airstrikes against a crowded funeral ceremony in Sana’a was in breach of international humanitarian law.  The UN officials said they found “in respect of the second airstrike, the Saudi Arabia-led coalition violated its obligations in respect of hors de combat and the wounded in this 'double tap' attack.”

International humanitarian law prohibits attacks against hors de combat - fighters incapable of defending themselves - the wounded, and medical personnel and units.  “The second airstrike, which occurred three to eight minutes after the first airstrike, almost certainly resulted in more casualties to the already wounded and the first responders," the UN monitors said.

“These first responders included civilians who immediately entered the area after the first airstrike to provide urgent first aid and undertake casualty evacuation,” they said.

The United Nations says some 140 people were killed in the attack on the funeral and several hundred more were injured.

Saudi Arabia has been engaged in the deadly campaign against Yemen since March 2015. Riyadh’s aggression, which has killed more than 10,000 in Yemen, was launched in an attempt to restore power to Hadi, a staunch ally of Riyadh who has resigned his post as Yemen’s president but seeks to force his way back into power.  The campaign also seeks to undermine the Houthi Ansarullah movement.

The UN puts the death toll from the military aggression at about 10,000. UNICEF announced on October 4 that violence had left over two million Yemeni children out of school.   UNICEF Representative in Yemen Julien Harneis said 350,000 children had received no education last year due to the deadly violence, which led to the closure of many schools across Yemen.