Faction of Divided Opposition Says No to Dialogue in Venezuela 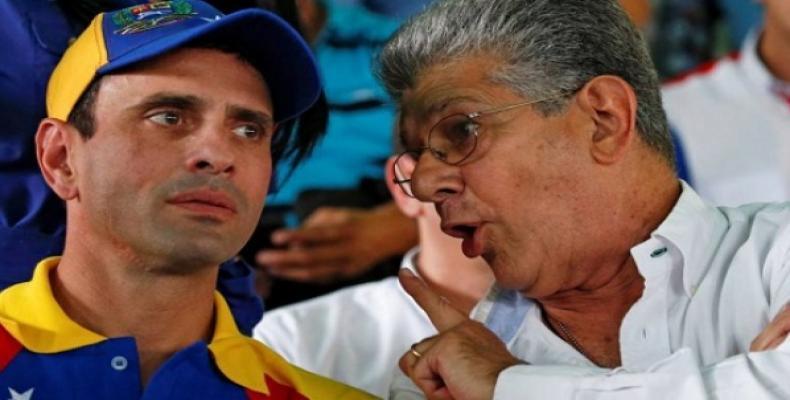 Caracas, October 25 (RHC)-- Henrique Capriles, two-time presidential candidate and a figure often billed as one of the leaders of Venezuela's opposition, claimed Monday that the announcement of formal dialogue between the government of Venezuela and the opposition was untrue.

Capriles said that the news that talks would begin at the end of the month came as a surprise to him.  According to Capriles, the opposition merely participated in a meeting with representatives from the Vatican but that no agreement to hold talks was reached.

“What dialogue?  In Venezuela a dialogue has not been initiated,” said Capriles on his radio show, which was simulcast on Periscope.  However, several of his colleagues from the so-called Democratic Unity Table, or MUD, participated in the announcement earlier Monday and the news was confirmed by the spokesperson of the opposition coalition, Jesus Torrealba.

Capriles instead insisted that a “coup” had taken place in Venezuela and issued a renewed call for street protests on Wednesday.

Tensions came to a head Sunday when the opposition-controlled National Assembly tried to declare that the government had broken with constitutional order after authorities suspended a recall referendum against Maduro due to a series of major irregularities on the part of the opposition, calling for the impeachment of the president.

The confusing announcement by Capriles serves as an example of a deeply divided opposition that has been unable to agree on a common strategy.

Their differences led to the delay in initiating the recall process, which — along with a number of errors and irregularities — ultimately led to the suspension of the recall referendum.

In his statement Capriles instead suggested the government was manipulating events and trying to divide the opposition.

It is unclear if Henrique Capriles' declaration simply means he and his faction of supporters will refuse to participate in the meeting between the government and the opposition or if he will try to persuade the rest of the opposition coalition to back out of talks.

Several other opposition leaders, including Maria Corina Machado, also said the news there would be talks came as a surprise.