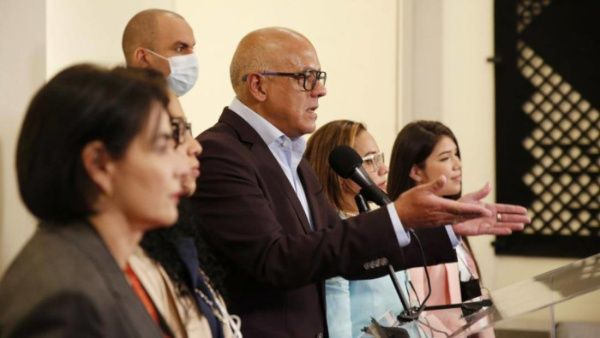 Mexico City, September 26 (RHC)-- The government and the Venezuelan opposition resumed this Sunday the dialogue table that both parties are developing in Mexico, after Norway pledged to remain impartial.

The Norwegian Foreign Ministry issued a tweet in which it reaffirmed its commitment "to the Venezuelan negotiation process in Mexico, acting as an impartial facilitator."   "We emphasize that the recent UN statement should not be interpreted as incompatible with that.  Our role depends on the full confidence of the parties," expressed the Foreign Ministry of the European country, which has acted as a facilitator in the Venezuelan-Venezuelan dialogue.

This official response came after the head of the delegation of the Government of the South American country, Jorge Rodríguez, after his arrival on Saturday in Mexico City, revealed that something happened that altered what was agreed in the memorandum of understanding.

"We ask for an explanation of something that happened at the UN General Assembly," said the president of the Venezuelan National Assembly in reference to the participation in that forum of the Prime Minister of Norway, Erna Solberg, who questioned Venezuela on human rights.

In the first instance, the representative of the Norwegian team in Mexico, Dag Nylander, regretted that the Prime Minister's statement at the UN had affected confidence in their role and committed to "strict impartiality."

After Norway's position, Rodriguez considered this situation "overcome" and announced that he would contact the representative of the oppositions to continue with this round until Monday, as scheduled.

The Venezuelan government and the opposition initiated last August a dialogue table in Mexico to reach national understandings.  From September 3 to 6, they held a second meeting, in which they signed two agreements.

The parties agreed on the ratification and defense of Venezuela's sovereignty over Essequiba Guyana, as well as agreements related to the social protection of Venezuelans.