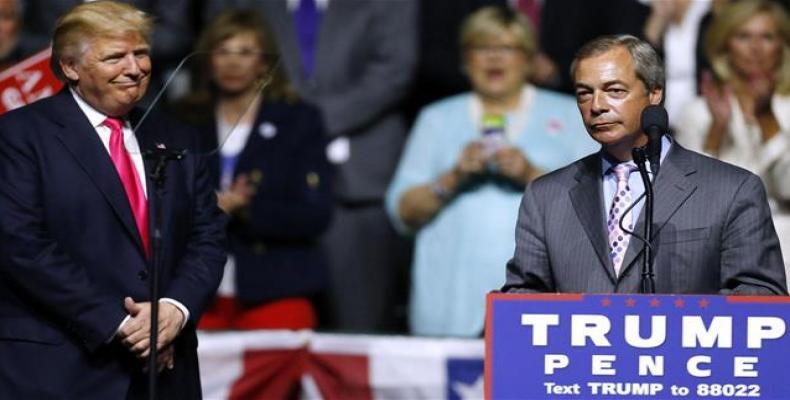 London, November 24 (RHC)-- Britain rejects an unprecedented call by a U.S. president to appoint an ambassador in Washington, dismissing the President-elect’s choice, Nigel Farage, for the post.

British Foreign Secretary Boris Johnson rejected Tuesday Trump’s idea that Farage, the UKIP’s interim leader, be appointed as the British envoy to the United States.  "We have first rate ambassador in Washington, doing a very good job of relating both with the president administration and the administration-to-be, “Johnson told the British parliament. "There is no vacancy for that position."

Earlier in the day, Trump said in a tweet that “Many people would like to see @Nigel_Farage represent Great Britain as their Ambassador to the United States. He would do a great job!”

“The world has changed.  It's time that Downing Street did too,” he said in a tweet, claiming in another one that “I have known several of the Trump team for years and I am in a good position with the President-elect’s support to help.”

“The dislike of me, UKIP, and the referendum result is more important to them than what could be good for our country.”

In the world of politics, it is unconventional for a leader to speak of their preference for a foreign ambassador in public.

Speaking in the House of Commons, Johnson stressed, however, that “the UK’s relationship with the U.S. is the single most important geopolitical fact of the last century.”  Comments against Trump “could be damaging to the interests of this country.  It is important for us in this country to use our influence, which is very considerable, to help the United States to see its responsibilities, as I’m sure they will.”

“One thing I have learned is that what is said in the campaign is different to what happens when the winner is in the White House.  It is very important for us to judge the new president by his actions in office.”

Concerns are apparently growing in London over the elevated status of populist figures like Farage, marketed to Trump by chief strategist Steve Bannon.  One of the most controversial figures in the Trump administration, Bannon is the former head of the right-wing Breitbart News website with ties to white racist movements.