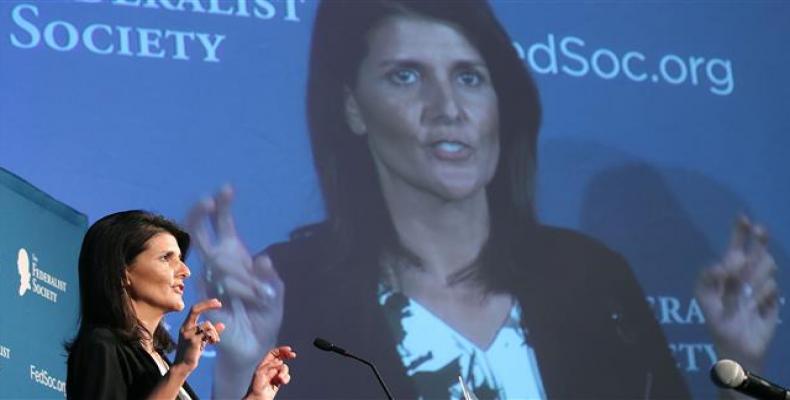 Washington, January 19 (RHC)-- U.S. President-elect Donald Trump's choice for U.S. ambassador to the United Nations has questioned whether Washington's funding for the world body "does more harm than good."

During her confirmation hearing on Wednesday, South Carolina Governor Nikki Haley said that she believes the United States should reconsider its contribution of 22 percent to the UN's annual budget.  In her opening statement before the questions began, the candidate for the United Nations post asked: "Are we getting what we pay for?"  And Haley said that the UN is increasingly moving away from U.S. interests at home and abroad.

"[The UN] is an institution that is often at odds with American national interests and American taxpayers.  More Americans are becoming convinced that the United Nations does more harm than good."

Haley strongly criticized the UN for a recent Security Council resolution condemning Israeli settlement construction on the occupied Palestinian territories.  She argued that last month's vote was "damaging" and proof of a long history of anti-Israel bias at the world body.

Donald Trump himself has long expressed skepticism about the UN, but his opposition was cemented by the decision to condemn Israel.