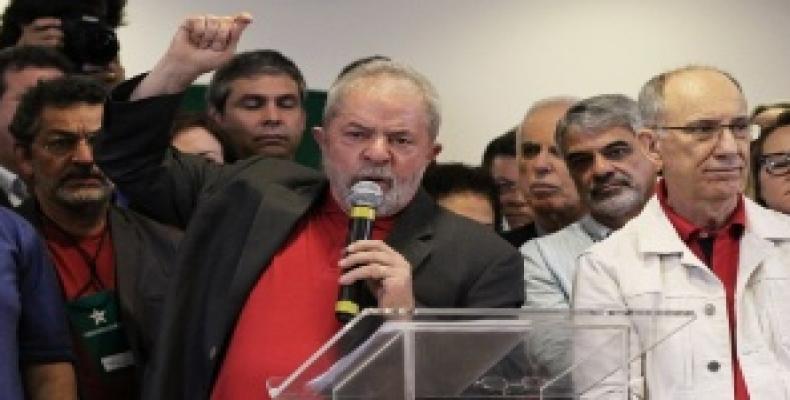 Brasilia, September 20 (RHC)-- Inconsistencies are beginning to surface in the allegations of corruption hurled at Brazil's former President Luiz Inacio “Lula” da Silva, as prosecutors' assertions contradict with the witness statements of one of the main informants in the case, the Brazilian newspaper Folha de Sao Paulo reported Monday.

Last week, prosecutors formally accused the former president, popularly referred to as Lula, of orchestrating a bribery scheme involving the state-run oil company, Petrobras.  The charges, which Lula and his supporters have dismissed as politically motivated, are part of a broad investigation known as “Operation Car Wash” that has targeted dozens of politicians for fraud within Petrobras.

Prosecutors allege that Lula appointed former Petrobras mid-level manager Paulo Roberto Costa in 2004 in exchange for “undue advantage.”  Costa served as director of supply in Petrobras from 2004 to 2012.  Lula's accusers claim that the appointment was a foundational maneuver to pave the way for bribery, illicit enrichment, and questionable campaign financing.

But Costa, targeted for fraud as part of Operation Car Wash beginning in 2014, denied in his 2015 testimony that he had conspired with Lula to get the position.  “I never even talked with the current president (now ousted President Dilma Rousseff), or with the (former) President Lula on this subject,” Costa said in his May 5, 2015 statements, according to Folha. “I never talked!”

When asked if Lula set up the entire corruption scheme, Costa said he was wholly unaware of any role that Lula had played in the scandal, and pointed out that he was appointed to his post a year and a half after Lula took office.  Costa also did not accuse Lula of bribery in his testimony, though his statements have implicated several other politicians in the Petrobras scandal, including high ranking opposition figures.

News of the contradictions come as federal judge Sergio Moro is expected to announce whether or not the court accepts prosecutors’ formal complaints against Lula.  The defense has argued that there is no proof to support the accusations, despite heavily scrutinizing Lula's every move for months as part of the probe.

The Supreme Court removed Moro from the case in March amid concerns over the legality of the investigations.  The questions arose after the controversial federal judge leaked a private conversation between Lula and his successor Dilma Rousseff, who was removed from office on August  31st in an impeachment vote widely condemned as a parliamentary coup. Moro was reinstated on the case in June.

With recent polls showing Lula as the clear favorite in the next presidential election, critics have argued that the accusations against Lula are a political maneuver to keep him off the ballot.  If convicted, Lula could be barred from running for public office for eight years.  De facto President Michel Temer has already been stripped of his political rights for breaking election financing rules, making him literally unelectable.

An editorial in the Mexican newspaper La Jornada last week argued that the political crisis in Brazil has morphed into a “judicial” phase following the “legislative” phase that resulted in Rousseff's ouster.  “The accusations against Lula seems to confirm that a white-collar coup was carried out in Brazil and that, as was the case with the military coups of the past, the stage of persecution of the defeated has already begun,” reads the editorial.

Progressive leaders in South America, including Ecuador's Rafael Correa, have accused conservative political factions in the region of waging a new “Operation Condor” against left-wing politicians, including Lula, through trumped up charges and political persecution.  The expression refers to the coordinated, U.S.-backed regional campaign under the dictatorships of the 1970s and 1980s to torture, kill, and otherwise silence left-wing political activists and “insurgents.”