Pope Francis Calls Out Against Greed and Money Idolatry 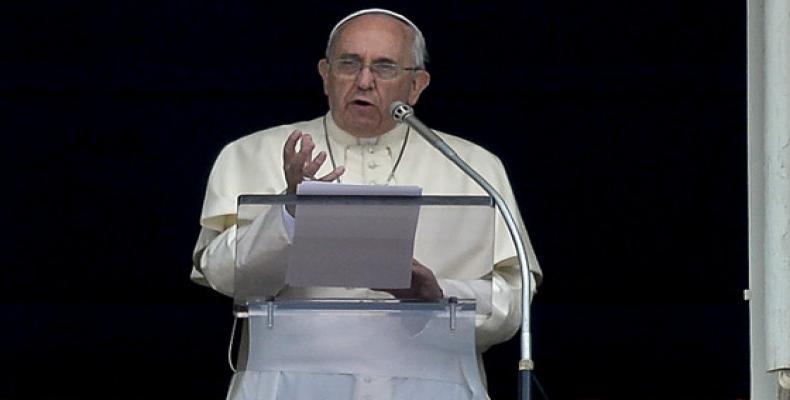 The Vatican, December 27 (RHC)-- Pope Francis, who has become known for wading into political and social issues, said that the greed of a minority is leading to continued human suffering, including war and slavery to money.

"Peace to the peoples who suffer because of the economic ambitions of the few, because of the sheer greed and the idolatry of money, which leads to slavery," he told some 40,000 people gathered in St. Peter's Square.  During his Christmas Eve Mass over the weekend, Pope Francis said the feast had been "taken hostage" by dazzling materialism that puts God in the shadows.

Pope Francis, the first Latin American pontiff, also said Christmas should inspire everyone to help the less fortunate, including migrants, refugees and those affected by war and political conflicts.  The Pope appealed for an end to tensions between the government and opposition in Venezuela, for harmony in Colombia following the historic peace agreement between the government and FARC rebels and urged Palestinians and Israelis to "write a new page of history."

The Pope's address from St. Peter's Basilica which also laid heavy emphasis on peace, comes days after Italian police killed the man believed to be responsible for the Berlin market truck that killed 12 as well as the assassination of Russia's ambassador to Turkey - an act linked the ongoing war in Syria.

Pope Francis called for the international community to help negotiate an end to the war in Syria, which has seen hundreds of thousands killed and millions flee as refugees during the 6-year civil war between Syria's government and extremist opposition groups.

"It is time for weapons to be still forever (in Syria), and the international community to actively seek a negotiated solution so that civil co-existence can be restored in the country," he said, adding that "terrorism" has touched the lives of many across the globe.

"Peace to those who have lost a person dear to them as a result of brutal acts of terrorism, which have sown fear and death into the hearts of so many countries and cities," the Pope said.

Since being elected to succeed Pope Benedict as the head of the 1.27 billion-strong Catholic Church, Pope Francis has not shied away from speaking about controversial political issues, including calling for a revision of conservative, Catholic doctrine, and condemning the capitalist system and its impact on the poor.