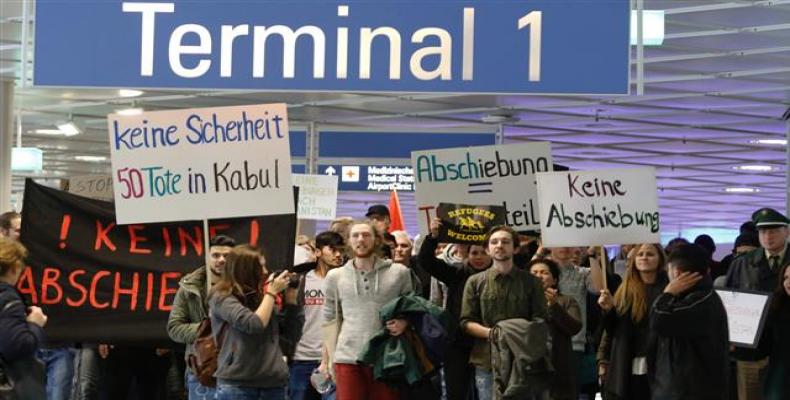 Holding banners that read “Stop deportation to Afghanistan,” and “No fences, no borders,” the protesters marched through the airport in a show of solidarity with Afghan refugees.  The rally coincided with the deportation of 50 asylum seekers from Munich to the Afghan capital, Kabul.

Earlier this month, German Chancellor Angela Merkel had called on authorities to accelerate the deportation of rejected refugees.  Germany was flooded with 890,000 asylum seekers, including many Afghans, in 2015. The number of such arrivals decreased to 280,000 in 2016, according to provisional figures released by the German government. Despite the significant decrease, the German government has had to cope with a number of difficulties as a result of the high numbers of the refugees already in the country.

Anti-refugee sentiments have, meanwhile, been on the rise in Germany and there have been increasing demands pressed by German opposition parties to curb the number of refugees.  The Western European country has been carrying out collective deportations based on an agreement with Kabul reached in early October 2016.

Europe has been experiencing an unprecedented influx of refugees over the past almost two years. The asylum seekers have been fleeing conflict-ridden zones in North Africa and the Middle East, particularly Syria.