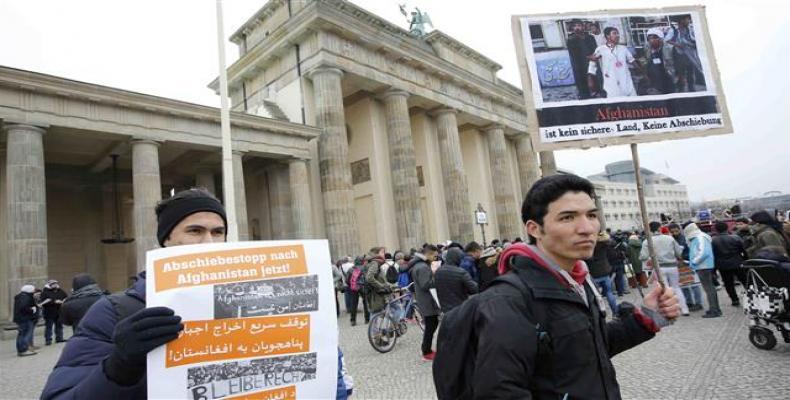 Berlin, February 13 (RHC)-- Several thousand people have staged rallies across Germany to protest the deportation of Afghan asylum-seekers from the country.  The demonstrators flocked to the streets in the German capital, Berlin, and other major cities over the weekend in support of the Afghan nationals who were obliged to return home after their asylum requests were rejected.

An estimated number of 2,000 protesters marched down the streets in Berlin and police reported that around 2,000 protesters had attended the rallies in Germany’s western city of Dusseldorf.  Nearly 1,500 others also demonstrated in the northern city of Hamburg.

Chanting slogans such as “Stop deportations” and holding banners that read “No one is illegal,” the demonstrators called on authorities to stop the obligatory repatriation of failed Afghan refugees.  “The people who are forced to return cannot live their lives in safety there.  A life in dignity is inconceivable under these conditions,” demonstration organizers in Hamburg said of the situation in Afghanistan.

The Refugee Council of the German state of North Rhine-Westphalia also described Afghanistan as an “unsafe country,” referring to a recent report by the United Nation refugee agency that shows the situation has deteriorated in Afghanistan.

Of the 250,000 Afghan refugees in Germany, 11,900 were asked to leave the country from mid-December last year, according to the German Interior Ministry.  Germany has been carrying out collective deportations based on an agreement Brussels and Kabul reached in early October 2016.

Afghan refugees constitute the second largest group of asylum seekers in Germany after Syrians. However, anti-refugee sentiments have been on the rise and there have been increasing demands pressed by opposition parties to curb the number of refugees.

In early February, German Chancellor Angela Merkel called on authorities to accelerate the deportations of rejected refugees.  Europe has been experiencing an unprecedented influx of refugees over the past months.  The asylum seekers flee conflict-ridden zones in North Africa and the Middle East, particularly Syria.

Many blame major European powers for the exodus, saying their policies have led to a surge in terrorism and war in the violence-hit regions, forcing more people out of their homes.