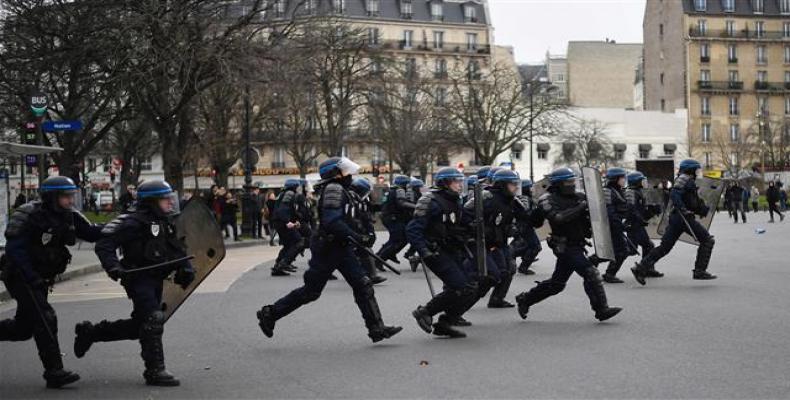 Paris, February 24 (RHC)-- French security forces have clashed with high school students and detained multiple protesters in Paris as the wave of unrest in the wake of police brutality shows no sign of easing.

Riot police used tear gas against students and their backers who tried to block the entrances to a dozen schools in the capital on Thursday.  The unrest was the latest in a series of protests across the country in recent weeks triggered by the brutal rape of a young black man -- identified only as "Theo" -- by four police officers during a routine ID check.

On February 2, the 22-year-old victim sustained severe injuries to his internal organs and had to undergo surgery after he was assaulted by the officers who used a baton on him.  One policeman has been charged with rape and the three others face assault charges in the case.

More than 200 arrests have been made since the protests began, according to the French Interior Ministry.  Anti-racism groups have been organizing the rallies to tackle the "structural problem of police violence" in France.

According to anti-racism groups, French police are targeting mainly Blacks and Arabs.  Police attacks, based on racial discrimination, have intensified after the country announced a state of emergency.

The Daesh terrorist group is mainly operating in Iraq and Syria; however, the Takfiri groups has extended its sphere of violence across the globe.