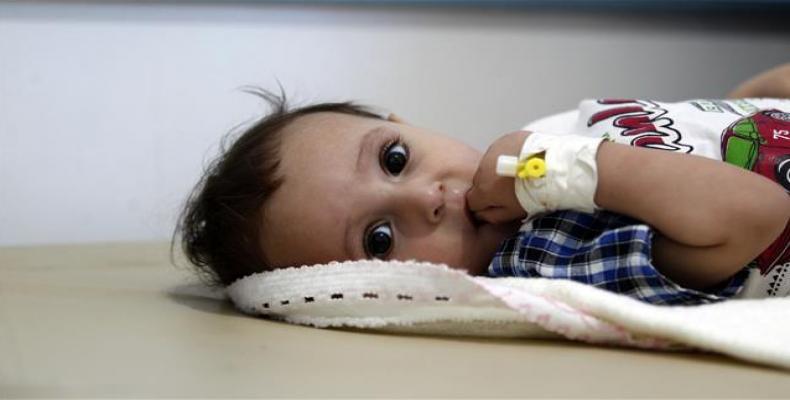 Geneve, July 11 (RHC)-- The Red Cross says the number of suspected cholera cases in Yemen has now surpassed 300,000 amid fears of runaway outbreak of the disease and the threat of famine looming over the war-stricken country.

The International Committee of the Red Cross (ICRC) made the announcement on Monday, saying that the cholera epidemic "continues to spiral out of control" since it erupted in April.  "Today, over 300,000 people are suspected to be ill.  More than 1,600 have died," the Geneva-based institution noted in a Twitter post.  The ICRC’s head of operations for the Middle East, Robert Mardini, said about 7,000 new cholera cases were being recorded on a daily basis in the Yemeni capital of Sana'a and three other areas.

The announcement came two days after Yemen’s former president, Ali Abdullah Saleh, singled out Saudi Arabia as the source of what the United Nations estimated to be the world’s worst cholera outbreak in the country.

The Russia Today Arabic news channel quoted Saleh as saying that the Saudi-led coalition was behind the spread of the highly contagious disease through the use of internationally banned weapons.

Cholera is an acute diarrheal infection that is spread through contaminated food or water. It can be effectively treated with the immediate replacement of lost fluids and salts, but without treatment it can be fatal.  Cholera infection first became epidemic in Yemen last October and spread until December, when it dwindled. The second outbreak began in the Arabian Peninsula country on April 27th.

The ongoing Saudi campaign against Yemen has destroyed the country’s health sector, making it difficult to deal with the epidemic.  Over two years of war and conflict have significantly reduced Yemen’s public healthcare capabilities.  All operating hospitals and clinics are now over-burdened by the epidemic for lack of medicine, equipment and staff.

Nearly 3.3 million Yemeni people, including 2.1 million children, are currently suffering from acute malnutrition. The Saudi-led war against Yemen has caused more patients to die due to medicine shortages.

International organizations, including the United Nations and the Red Cross, say the Saudi war and an embargo may be responsible for the cholera epidemic.  The UN's World Food Program has described the situation in Yemen as "the largest humanitarian crisis happening in the world at the moment."