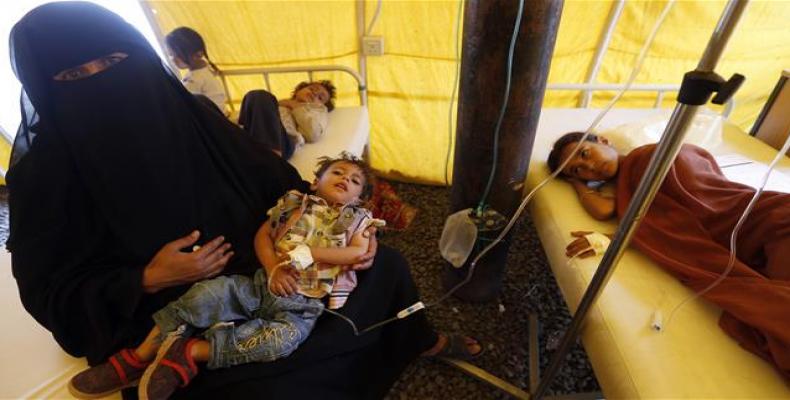 United Nations, July 13 (RHC)-- The United Nations has blamed Yemen’s cholera crisis on the perpetrators of the ongoing war against the impoverished country and their foreign supporters.

Stephen O'Brien, the UN under-secretary-general for humanitarian affairs, told the UN Security Council on that the “man-made” outbreak of the deadly disease was “a direct result” of the Saudi-led aggression and “serious violations of international law."

"This cholera scandal is entirely man-made by the conflicting parties and those beyond Yemen's borders who are leading, supplying, fighting and perpetuating the fear and fighting," he said. "You will have to lean much more heavily and effectively on the parties and those outside Yemen who are leading this policy and action," the aid official told the council.

The U.S. and the UK have been the main purveyors of weapons, training and intelligence to Saudis during the course of the unprovoked war, which began in March 2015.  The UN official warned that the suspected cholera cases across Yemen had surpassed 320,000 while at least 1,740 had lost their lives after being infected.

O’Brien noted that the UN had only raised $47 million of $250 million in funding that it needed to battle the crisis. He also called on the Security Council to help reopen health centers in Yemen by ensuring that public servants would get paid.  Yemen's UN envoy Ismail Ould Cheikh Ahmed said the “appalling” cholera outbreak was only one of the “complex emergencies” that the country was dealing with.

The Saudi-led war has destroyed most of Yemen’s infrastructure and put nearly half of the country’s population on the verge of famine.  Local Yemeni sources have put the death toll from the Saudi war at over 12,000, including many women and children.

O’Brien said Wednesday that in order to speed up the aid process, the airport in the capital Sana’a needed to reopen, months after Saudi attacks rendered it unusable.

The port of Hudaydah, a crucial lifeline for deliveries of food, medicine and other vital goods also needed to be kept safe from attacks, he added.  Saudi warships have been closely monitoring the port, sending away many of the ships carrying humanitarian aid.