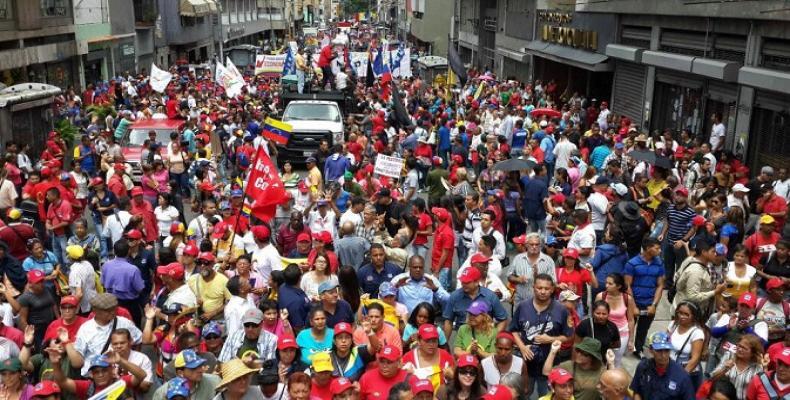 Caracas, August 8 (RHC)-- Tens of thousands of Venezuelans marched in support of the country's National Constituent Assembly on Monday.  They set off from Morelos Square in Caracas and headed to the parliament building where the Constituent Assembly, the ANC, is in session.

The march was designed to build further support for the members of the ANC who were elected on July 30th by more than eight million voters.

"The time has come for right-wing violent acts to be punished with the full weight of the law," said Maigualida Mijares, a member of a local committee of the United Socialist Party of Venezuela, who took part in the march.  She added that the people have experienced more than three months of disruption from right-wing forces that "only want to attain power by the use of force."

The 545 elected members of Venezuela's ANC, which unites broad sectors of society, have already begun their discussions on how to update the country's 1999 Constitution, which was drafted by a previous body organized by the late President Hugo Chavez.

Constituent members also agreed to install a non-partisan Commission for Truth, Justice, and Reparation for Victims, which will be tasked with investigating violent political acts over the past few years.

“To those who use violence, to the fascists, to those who make economic war on the people, justice will be served,” ANC President Delcy Rodriguez said.  Venezuela's former foreign minister added that the ANC, with its “sovereign and plenipotentiary power,” will “heal Venezuela of the wounds of the economic war.”

Venezuela's ANC has received support from many corners of the world, including the Organization of Solidarity with the People of Asia, Africa and Latin America, the Council of Electoral Specialists of Latin America, and the Network of Communicators of MERCOSUR, just to name a few.

Nevertheless, the institution and the country's leaders have been deemed “dictators,” sanctioned, and threatened by a U.S. administration that came to power garnering second place in the popular vote and installed by an electoral college.