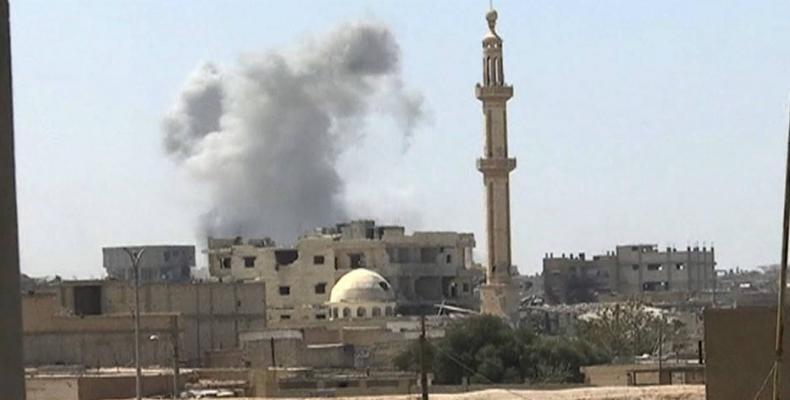 United Nations, August 24 (RHC)-- Syrian has called on the United Nations to halt the U.S.-led coalition’s continued targeting of civilians during their operations in Raqqah.  The Syrian Foreign Ministry sent two letters to UN Secretary General Antonio Guterres and the chairman of the UN Security Council condemning the US-led coalition for committing war crimes its operations in Syria.

“The warplanes of the U.S.-led coalition added a new crime to their criminal record by targeting civilians and infrastructure in Syria on Tuesday the 22nd of August through shelling the residential neighborhoods in Raqqah, claiming the lives of 78 civilians, injuring tens of others, most of them women and children, and causing huge damage to the local and private properties,” read the letters.

The letters were written a day after the so-called Syrian Observatory for Human Rights reported that since the beginning of the week, over 170 civilians, mainly women and children, had been killed in U.S.-airstrikes in Raqqah, and that the toll was the highest since operations to liberate Raqqah began.

“The government of the Syrian Arab Republic calls on the Security Council to implement its resolutions on the fight against terrorism, especially Resolution 2253, and to immediately stop the crimes by the coalition against innocent civilians in Syria,” added the letters.

Meanwhile, Amnesty International released a report confirming that the US operations in Raqqah were greatly endangering civilians.  “As the battle to wrest Raqqah from Daesh intensifies, thousands of civilians are trapped in a deadly labyrinth where they are under fire from all sides. Knowing that Daesh uses civilians as human shields, the Syrian Democratic Forces (SDF) and US forces must redouble efforts to protect civilians, notably by avoiding disproportionate or indiscriminate strikes and creating safe exit routes,” said Amnesty International's Senior Crisis Response Adviser Donatella Rovera.

“Things will only get more dangerous as the battle reaches its final stages in the city center. More can and must be done to preserve the lives of civilians trapped in the conflict and to facilitate their safe passage away from the battleground,” she added.