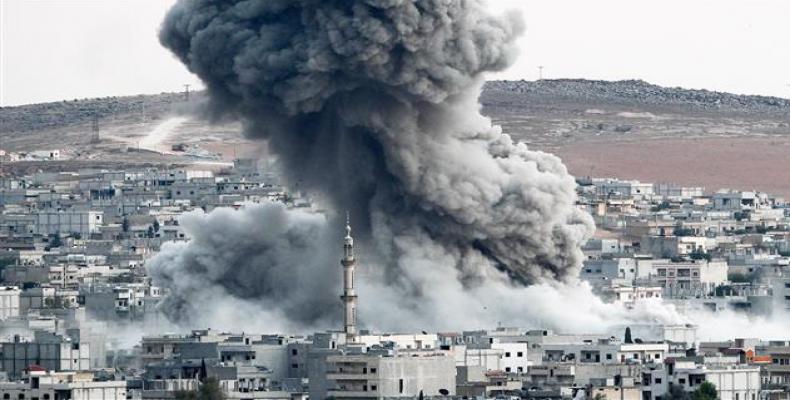 Damascus, June 13 (RHC)-- A dozen civilians have lost their lives and several others sustained injuries when the US-led coalition purportedly fighting the Daesh Takfiri terrorist group carried out a string of airstrikes against Syria’s northeastern province of Hasakah.

Local sources, requesting anonymity, said the airborne assaults targeted residential buildings in Tal Shayr, which is located in the southeastern part of the province, causing the casualties, Syria’s state-run television network reported.  The development came only one day after at least 18 Iraqi refugees were killed when a US-led airstrike hit a school in Khuweibra village of Hasakah province.

The U.S.-led coalition has been conducting airstrikes against what are said to be Daesh targets inside Syria since September 2014 without any authorization from the Damascus government or a UN mandate.  The military alliance has repeatedly been accused of targeting and killing civilians.  It has also been largely incapable of achieving its declared goal of destroying Daesh.

Syria’s Ministry of Foreign Affairs and Expatriates, in two separate letters addressed to United Nations Secretary General Antonio Guterres and the rotating President of the UN Security Council Vasily Nebenzya on June 5, condemned the continuing attacks by the US-led coalition against innocent Syrians, and its assaults on the sovereignty, unity and territorial integrity of the conflict-plagued Arab country.

The letters further noted that the “illegal” US-led coalition continues to perpetrate massacres against Syrian civilians, leaving scores of people, including elderly people, women and children, dead over the past few days and destroying homes as well as civilian properties and infrastructure in targeted villages.

The Syrian foreign ministry added that the U.S.-led coalition is devoid of any international legitimacy, and has bombarded people in the provinces of Hasakah, Raqqah and Dayr al-Zawr after they did not agree to support U.S.-backed Syrian Democratic Forces (SDF) militants.

They noted: “The United States has on occasions offered direct support to Daesh Takfiri terrorist group – the latest of which was on May 24 when U.S.-led fighter aircraft struck Syrian army military sites between Albu Kamal border town and Hmeimim Air Base less than 24 hours after government forces thwarted Daesh assaults on its positions.”

“The U.S.-led coalition’s continued war crimes and crimes against humanity against Syrian people, its support for terrorism and use of terrorists and separatist militants to achieve its despicable political purposes confirm that the sole purpose of this contingent is to undermine Syria’s sovereignty, unity and territorial integrity, and prolong its crisis,” the Syrian foreign ministry pointed out.