Another Journalist Gunned Down in Central Mexico 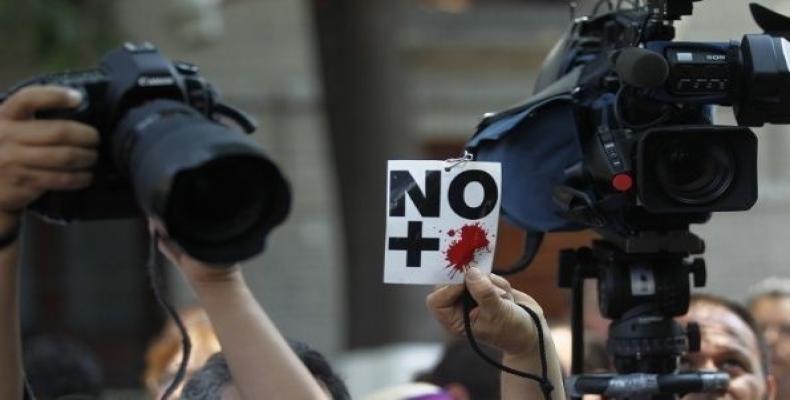 Mexico City, September 8 (RHC-teleSUR)-- In the latest attack on journalists in Mexico, Juan Carlos Hernandez Rios, a contributor to La Bandera Noticias, has been shot dead after he left his home in the state of Guanajuato.

The 29-year-old reporter was attacked by two men dressed in black and carrying large-caliber weapons.

He worked as an editorial assistant and photographer for the news website that is known to have received threats in recent months, local media reports said.

Hernandez, who also worked as a taxi driver, was rushed to the community hospital in Yuriria but later died from his injuries.

According to a recent report by Article 19, the press freedom group, 2016 was the most deadly year for the press in Mexico over the past decade with 11 journalists murdered and more than 400 attacks on media workers.

The organization says a journalist is now targeted every 15 hours, equalling a 23 percent increase in attacks against media workers, compared to 2016.

Mexico has become increasingly dangerous for reporters as they expose organized crimes in the region.  More than 100 journalists have lost their lives since 2000.

Mexico recently ranked first in Latin America on the 2017 Global Impunity Index with many crimes going unpunished. The press freedom organization also said that perpetrators of these crimes get away with murder 99.7 percent of the time.

According to the Committee to Protect Journalists, at least 48 journalists were killed in Mexico in 2016 and 72 in 2015.  Reporters Without Borders said in February that Mexico is now the most dangerous country in Latin America for the profession.