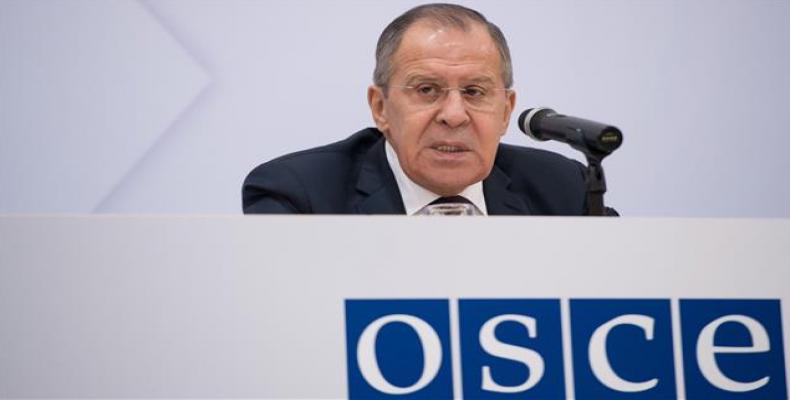 Lavrov made the remarks on the sidelines of the 24th Ministerial Council of the Organization for Security and Co-Operation in Europe (OSCE) in Vienna, Austria, on Friday.

He said Washington had told Moscow in September that “before spring there are no planned military drills near the Korean Peninsula.”  The Russian foreign minister said the information was understood by Moscow as Washington's readiness to create some conditions for a dialogue.  “We transmitted that signal to Pyongyang.  They did not say no.”

“But in just two days unscheduled, unplanned large-scale drills in October were announced which no one expected.  After the drills Pyongyang again did not make any sudden movements.  And wishing this sudden movement to happen, one more exercise in December was announced at the end of November.”

The U.S. military has been conducting joint exercises with South Korea since December 4, drilling mock attacks on North Korea in different war scenarios.  Earlier this week, North Korea said that those drills made war with the U.S. inevitable.

Lavrov said Pyongyang test-launched a missile, "which by all accounts is an intercontinental one" following the announcement about the US-South Korea drills.

North Korea successfully launched a new type of an intercontinental ballistic missile (ICBM) last week, following which the country declared that it had “realized the great historic cause of completing the state nuclear force.”

"I am not trying to excuse this (North Korean) launch,” Lavrov said, stressing that Moscow had denounced the North’s missile launch, but “the United States acted as if they wanted to provoke them for a new risky venture.”

The Russian official said that “now it will get more difficult to create conditions for renewing the dialogue,” adding: “But we are certain - the North Koreans told us that repeatedly - that they need security guarantees.”

The U.S. has been at odds with North Korea over its rapidly-advancing weapons program.  Pyongyang, in turn, says it is developing its missiles and nuclear program to guard against potential hostility by the U.S., which has substantial military presence in the region.